Last June, I wrote about cycling to Rainy Pass on the North Cascades Highway. For half the year, however, this road is closed as snow accumulation and avalanche danger, especially, become too great to keep it open. On weekends in spring, when road crews pause their work to clear snow and avalanche debris, the highway opens to bicyclists, so last Friday I took a rare opportunity to ride a car-free road. I found springtime fully fledged at low elevations in the North Cascades and winter’s legacy still holding a firm grip on the high country.

At low elevations, near the town of Newhalem, the weather and vegetation reflect mature springtime conditions. Hummingbirds seek nectar from red-flowering currant, deciduous plants are nearly fully leafed-out, and the ground is snow-free.

Heading east through Ross Lake National Recreation Area, the road climbs most steeply where it skirts the three hydroelectric dams on the Skagit River. Even here, at elevations below 1000 feet, avalanches will sometimes crash across the road when winter conditions are right. 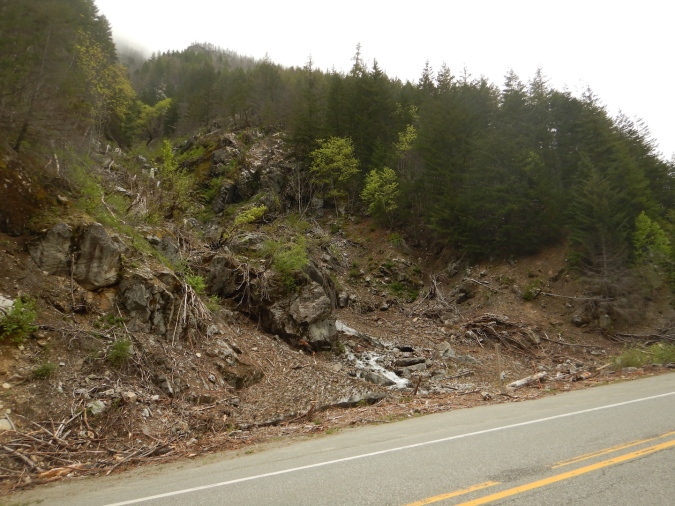 In February 2017, a large avalanche crossed the highway at this location, trapping a few dozen people on the other side for several days.

An avalanche covering the road at the same place on February 25, 2018. Photo courtesy of Washington State DOT.]

After fifteen miles of riding, beyond Diablo Lake…

…I reached the Ross Dam trailhead where the highway remained closed to cars.

Freed of the stress of close encounters with cars, cycling on car-free roads is wonderfully relaxing. Even as I remained reasonably alert for hazards and other cyclists, I was able to do stupid things I’d never try when sharing the road with motor vehicles—like riding down the centerline while recording video.

For me, the car-free environment also promotes stopping where anything catches my attention. Ascending higher into the mountains, I watched as the vegetation became less and less green. From a certain phenological perspective, I was moving backwards through time. By the time I reached 2,500 feet in elevation, most of the raucous birdsong of the Skagit lowlands disappeared and deciduous plants were just breaking bud.

Big leaf maple has already finished blooming at low elevations along the Skagit River, but it was still in full flower around 3000 feet in elevation along the highway.

Around highway mile 150, about 15 miles beyond the gate at Ross Dam and 4,000 feet above sea level, snow continuously covered the ground. It only became deeper as I pedaled farther. Just a couple of miles shy of Rainy Pass, where state road crews had halted their work for the week, snow remained five feet deep on the road. 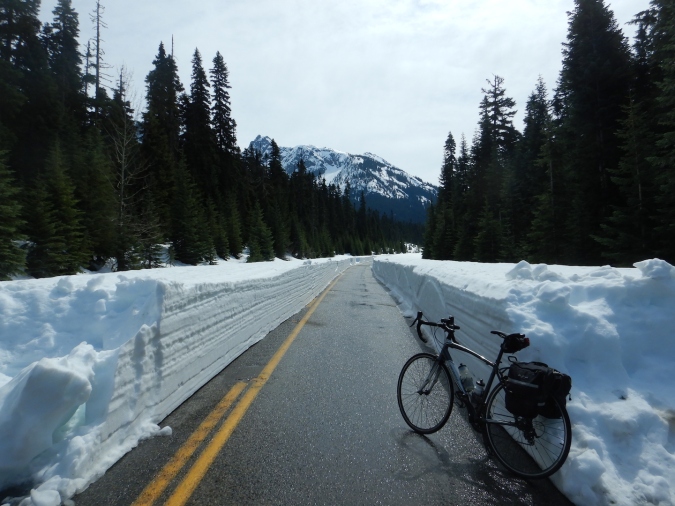 As it melts, the snow provides much needed water to streams and rivers in a mountainous region where summer drought is common. For many plants though, the deep snow hinders growth well into summer. On the day of my ride, temperatures hovered in the 60s˚ F, certainly well within the temperature tolerance of plants in the Cascades, but the deep snow keeps the underlying soil cold and dark. Under these conditions, most plants have to lie dormant until growing conditions improve. In the North Cascades, where snow accumulation is so deep and extensive, this set of conditions creates a perpetual spring season on the margins of the snow pack. This gives wildlife like deer and bears the opportunity to eat young and nutritious plants through July and August.

Yellow avalanche lilies (Erythronium grandiflorum) are currently blooming in the Diablo Lake area. More commonly associated with meadows at higher elevations, these perennials have a short growing season. They begin to grow from a perennial bulb as soon, and sometimes even before, snow cover melts away to take advantage of ephemerally moist soils. By late July, the soils where this specimen grows will have become powdery dry, but at higher elevations this species will still be in flower.

Late last July, long after I began to feast on blueberries at low elevations, blueberry plants in a snowy portion of Pelton Basin has just begun to leaf out. Late season berries are an important food source for bears this area.

Even during this ride into the middle elevations of the North Cascades (the highest non-volcanic peaks here top out over 9,000 feet tall), it was easy to see how snow exerts a significant influence on the landscape. The week of my ride, road crews reported nine feet of snow at Rainy Pass (el. 4,855’). In a couple of months, when tender plants like yellow avalanche lilies have withered and dried at lower elevations, I can ride up here again and find a microcosm of spring along the edge of the remaining snow.

6 thoughts on “Spring cycling along the North Cascades Highway”