Last week, clear weather and a day off combined to allow Rocinante (yes, I name my bicycles and you should too) and I to ride the North Cascades Highway through Ross Lake National Recreation Area and Okanogan National Forest to Rainy Pass. This road, also known as Washington Route 20, is the last major highway constructed over the Cascades in Washington. It bisects one of the largest roadless areas in the Lower 48 and traverses a densely mountainous region that repeatedly confused 19th century explorers.

So many roads skirt mountains, but on this one I felt like I was truly in them. The highway, while never extremely steep, climbs considerably from Seattle City Light’s company town of Newhalem to Rainy Pass and beyond. For someone who is easily distracted by scenery, wildlife, and plants though, it also offers many excuses to slow the pace of travel. Just east of Newhalem, for example, lies the remnants of the Skagit River gorge.

Beginning in the 1920s, the Seattle City Light harvested the energy of the Skagit in a series of dams. Collectively, these dams provide twenty percent of Seattle’s electricity.

Gorge Dam is the first of three hydroelectric dams on the Skagit River. Skagit gorge runs empty almost always because the river’s water is diverted from Gorge Dam through a tunnel to a powerhouse in Newhalem.

Before these dams were constructed, no road penetrated this section of Cascades. Miners and homesteaders had to navigate the gorge’s cliffs along a precarious “Goat Trail” above the raging river. My journey via bicycle was a bit easier than the Goat Trail despite the elevation gain. The road climbs up and down through the gorge then ascends again before skirting the southern shore of Diablo Lake, the second reservoir on the Skagit. This stretch of road combined with the continued climb above Ross Lake, in my opinion, is the toughest section for cyclists along the highway. 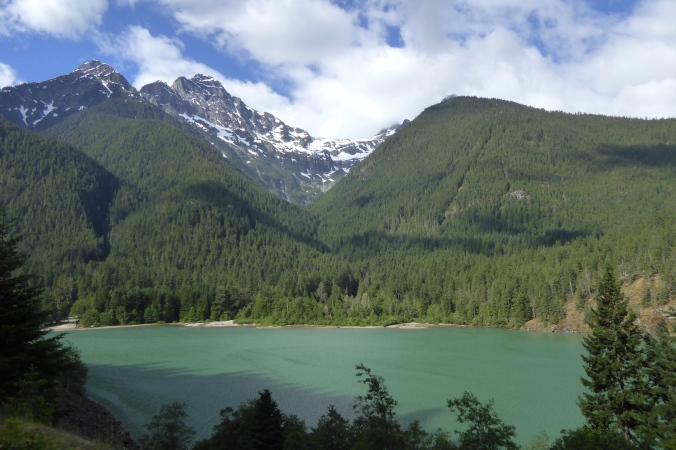 Diablo Lake is deep in the heart of the North Cascades. Its aquamarine color is the product of glacial flour backscattering blue and green wavelengths of light.]

Ross Lake is the highest and largest reservoir in the Skagit watershed.

Even though Diablo and Ross lakes’ water flow west into Skagit River and Puget Sound, the reservoirs lie east of the Cascade crest. Here, a drier forest grows compared to the wetter lowlands downstream of Newhalem. The contrast is especially apparent on sunny slopes where snow doesn’t linger in spring. Douglas-firs and lodgepole pines tolerate these conditions well. At lower elevations along southern Ross Lake, pockets of ponderosa pines, a species much more common on warmer drier soils to the east, also linger.

Above Ross Lake, the road grade lessens easing the burden on my legs and lungs. Sight lines and road shoulder widths increased too, making the highway safer for bicycles. With increased elevation, the forest composition shifted to include some western white pine then lots of mountain hemlock and subalpine fir. With a moderate tailwind, I could pedal uphill and still enjoy views of the montane forest and craggy, snow-covered mountains bordering each side of the highway.

After 35 miles of cycling and over 5,000 feet of cumulative elevation gain, I ate lunch at Rainy Pass (el. 4,855 feet). Fifty-three weeks ago, I cycled over this pass as part of a larger bicycle trip around the North Cascades area. That day was chilly and wet. I encountered frosty conditions and fresh snow from the previous night.

On this ride however, I needed only a light windbreaker.

The North Cascades Highway is also part of Adventure Cycling’s Northern Tier route. I knew I’d see touring cyclists pushing to the pass and beyond and I knew they’d be hungry so I brought candy bars to give away to those out for the long haul. When I rode across the country on my bike in 2004, there were many days where I felt like I couldn’t eat enough and many people offered food, a lawn to camp on, or even a room in their home. My free chocolate was a very small attempt to reciprocate a bit of that generosity.

A little surprisingly, almost all the touring cyclists I encountered before Rainy Pass kindly rejected my offer of empty calories. If they were creeped out by a stranger peddling candy, then they hid their concerns well. (Maybe my approach was a little off—“Hey, want some candy bars?” said the weirdo who approached you on the side of the road in the middle of nowhere.) More likely though, my offer came too early in the day when energy from breakfast still lingered. At Rainy Pass, the same cyclists gladly accepted the treats.

I spoke with cyclists from Germany, Great Britain, and a group from Massachusetts raising awareness of epilepsy.

Clif Read (center) and some of his riding companions pause at Rainy Pass on their tour to raise awareness of epilepsy. Follow their journey at c2c4charlie.org/.

As unprepared as I was, carrying little more than a windbreaker and some peanuts, I felt an urge to continue my ride, joining the others heading east toward the Atlantic Ocean. I suppressed that travel bug though and let the long-distance cyclists continued on their way while I turned back west to enjoy the mostly downhill ride into the Skagit Valley.