Bearcam is back! While brown bears fishing at Brooks Falls are the cam’s main attraction, bears also engage in another important event—courtship. Bears make new cubs at this time of year.

Courtship is a conspicuous part of bear life in spring and early summer. Sometimes a male bear encounters a female bear at the right time and they copulate immediately, but more often bear courtship is a prolonged affair. From an ursine perspective, courtship is a process in which a male follows a female in estrus, habituating her to his presence until she is ready to mate. 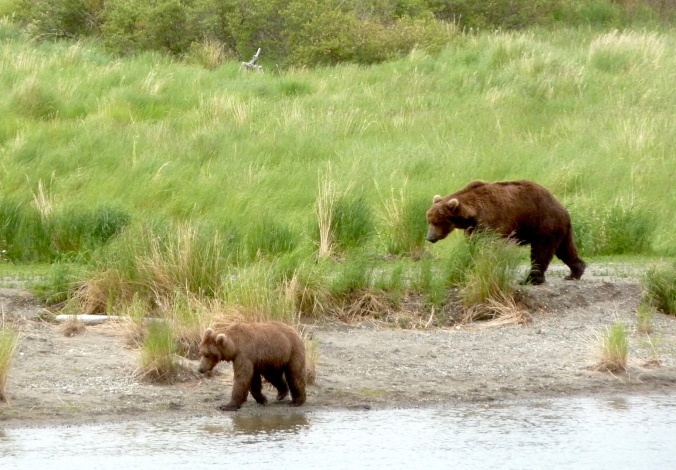 Courting pairs are easy to recognize by the male’s conspicuous and persistent behavior. A male bear recognizes an estrous female by her scent. He then walks behind her, shadowing her movements like he has a laser sight affixed to her rump (hormonally, the simile may not be far from the truth). However, bear courtship contains neither romance nor effort from the male to attract the female. He’s simply biding his time.

Copulation takes place only when the female is ready, which may not be for days. (The longest courtship I ever noted at Brooks River was 10 days.) It’s certainly not uncommon to see a male following a female for hours and hours.

Over those hours and days, the male follows her, guarding his access for the opportunity to mate. If another male of equal or greater dominance catches the female’s scent, then the two males may engage in a violent fight. Male testosterone levels peak, not coincidentally, in June as well. In late spring and early summer, fresh wounds on dominant adult males may be battle scars from a fight for access to a female bear. Bigger can be better in the bear world.

In June 2015, 814 Lurch returned to Brooks Falls missing an ear and with a large wound in his right cheek. These wounds could have been received during a fight with another male over access to a female.]

The victor continues his slow pursuit until the female decides the time is right. Outside of the mating season, male bears pose real threats to smaller females (sometimes, albeit very rarely, killing them) so the close, persistent proximity of a large male must be alarming at first. Eventually, hormones and habituation to the male overcome her initial trepidation.

Even then, the female may not be ready.

Copulation lasts upwards of twenty minutes. Brown bear females are promiscuous and may mate with more than one male. Her estrus cycle isn’t a single event. She can have several over the mating season, which generally runs May through July. Female black bears may be induced ovulators, so brown bears could be too, and while no evidence of multiple paternities has yet been confirmed at Brooks River, a single litter of cubs could have multiple fathers.

If mating is successful, the fertilized egg divides only a few times before entering a state of arrested development in the mother’s uterus. Only after she enters the den in the fall will the blastocyst begin to grow again. Through this delayed implantation, female bears can focus the rest of their summer efforts gaining enough fat reserves to survive hibernation. This allows cubs to be born in mid-winter when they are most protected in their mother’s den.

Over the next few weeks on bearcam, watch for male bears to doggedly follow single females. This is the most conspicuous sign of bear courtship, a season is marked by competition, conflict, persistence, and the promise of another generation of bears at Brooks River.