“This is the jewel in the crown of America’s fisheries resources – these salmon. If you don’t think this is worth saving, what is? To me, if you don’t draw a line in the sand here, there’s none to be drawn anywhere.”

Thomas Quinn
Professor, University of Washington and author of The Behavior and Ecology of Pacific Salmon and Trout

After more than a decade of controversy, Pebble Mine is inching closer to reality, and from the perspective of salmon, we couldn’t choose a worse place for an open pit mine.

If you’re unfamiliar with Bristol Bay, its salmon, or Pebble Mine, please watch this 2012 overview on the Pebble Mine controversy, keeping in mind the mine’s currently proposed size and mineral processing plans are different than those outlined in the video.

Pebble Mine is a proposed open-pit copper, gold, and molybdenum mine at the headwaters of some of the last intact and most productive salmon habitat on Earth. Before any development of the mine can begin however, it must be permitted, and before it can be permitted, it must undergo an extensive environmental review. This is where we stand currently: the environmental impact statement (EIS) process for Pebble Mine has begun.

An EIS goes through several stages before a “record of decision” is finalized. Right now, the Pebble EIS is only at the scoping level. If you’re unfamiliar with the EIS process, public scoping is basically a brainstorming step. It’s the public’s opportunity to help define the breadth of the EIS to the lead agency, which in this case is the Army Corps of Engineers. (Read more about the scoping process.) During public scoping, if people don’t express concerns for the ecosystem-wide impacts of Pebble Mine and its infrastructure then the Corps’ EIS will not address them. Therefore, we must comment during the scoping period and demand that the alternatives in the EIS address the mine’s full environmental impact—which will sprawl across southwest Alaska and threaten the last great sockeye salmon run in North America.

The Bristol Bay area is exceptionally special and unique. Its landscape remains largely undeveloped and un-engineered. The major factors that decimated salmon elsewhere—habitat loss, dams, and pollution—are absent and salmon runs reach tens of millions of fish annually. Bristol Bay is where we can imagine the richness of fish that used to flood into the Columbia River or New England. It remains home to one of the most valuable and sustainable fisheries on Earth, one of the few remaining places where the full potential of the ecosystem is realized. 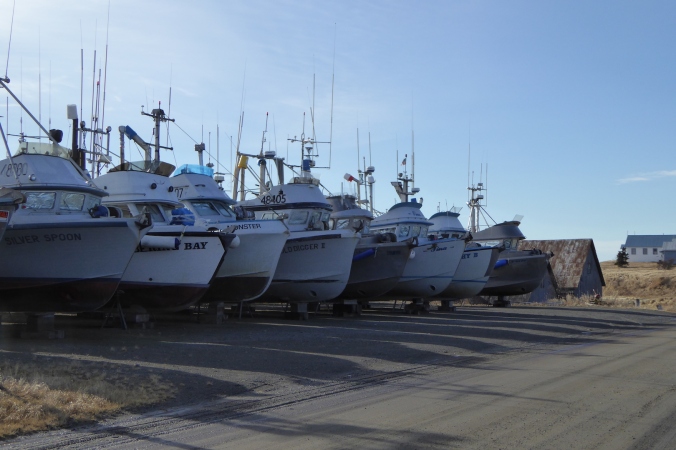 The Pebble EIS must address the mine’s potential, worst-case scenario effects on Bristol Bay’s salmon. A failure to contain the mine’s toxic tailings and wastewater would directly impact two of Earth’s most productive salmon producing watersheds. (The Kvichak River watershed, where part of the mine will be located, is home to the single largest salmon run in the world.) It must address potential groundwater exchange in the abandoned open pit, and whether the mining company can eliminate the risk of acid mine drainage. It must address whether the embankments for tailings ponds can withstand high magnitude earthquakes. It must address whether it’s even appropriate to build a mine whose wastewater will need to be treated indefinitely. It also must critically evaluate the mine’s supporting infrastructure, as it will potentially disrupt the world’s largest seasonal congregation of brown bears.

Pebble Mine will straddle the divide between the Nushagak and Kvichak watersheds, two of Bristol Bay’s riches salmon producing areas.

By law, the EIS process must identify the least environmentally damaging practicable alternative. Common sense implies the least damaging alternative in this case is no mine at all, but the National Environmental Policy Act does not require agencies implement it. If we don’t demand the Corps critically evaluate the myriad impacts from the mine, then the Corps will merely focus on holes in the ground, “alternatives” of natural gas versus diesel to power the mine, how wide the service roads will be, and the size of the ports. The scope of the EIS will be so narrow to be useless for the protection of salmon. (For an idea of what this might be, look no further than the Donlin Mine Final EIS, whose purpose and need is: “produce gold from ore reserves from the Donlin deposit using mining processes, infrastructure, logistics, and energy supplies that are economical and feasible for application in remote western Alaska. The applicant’s stated need for the project is to provide economic benefits to Donlin Gold, Calista, and TKC shareholders; and to produce gold to meet worldwide demand.”)

I recognize a sad irony—or hypocrisy, if you prefer—of using a computer, which contains gold and copper, to type this post. I understand there’s a hole in the Earth, perhaps filled now with toxic water, where the metals in my machine were once trapped in rock. If you, like me, think Pebble Mine is irresponsible, then voice your opposition not only through the EIS process and with your votes at the ballot box (politicians who support Pebble Mine will not receive my vote), but also by reducing your consumption of products that use gold and copper. We, as consumers, need to say enough is enough. Our addiction to ever-higher levels of consumption brought us here. It’s not really sufficient to say “I’m opposed to Pebble Mine” then go out and buy the newest iPhone even though your old phone works just fine.

Everything we use, everything we make, has a cost. We’re at a point in history when surging human population growth and mass consumption are pushing ecosystems and species to their breaking point, creating an ecologically impoverished planet. In New England, wild Atlantic salmon are nearly extinct, and on the U.S. west coast only a tiny fraction of Pacific salmon return compared to historic levels. Don’t kid yourself: This sad story can repeat itself in Alaska.

We lose salmon one impassible culvert, one dam, one levee, one mine at a time, leaving us to suddenly wonder, where did all the fish go? In Bristol Bay we have a chance, maybe our last chance, to save large runs of wild salmon. If the mine is built and its proposed safeguards fail, we risk losing a significant portion one of the world’s last great sustainable fisheries. Future generations won’t be celebrating our decision if we develop this mine. They’ll criticize us for not learning from the mistakes of the past. Are we really willing to let hyper-consumerism and the promise of short-term profits potentially destroy the last great salmon run?

It looks like we’re on track to do so, unless enough people step up and say no.