Recently, I wrote about an impending threat to Bristol Bay’s salmon: Pebble Mine. The mine, if developed, will have significant effects across some the richest salmon and brown bear habitat left on Earth.

Salmon remain the ecological and cultural heartbeat of Bristol Bay. This mine will create billions of tons of semi-fluid toxic waste, which must be treated and prevented from entering the watershed indefinitely. Impacts from development are never completely restricted to the development’s footprint either. Roads fragment habitat and vehicle traffic displaces wildlife.

When I was born, Pacific and Atlantic salmon fisheries in the Lower 48 states were already significantly degraded. Nearly 40 years later, many salmon stocks in New England, California, Oregon, and Washington remain threatened or endangered. Only a small fraction of fish return to these areas compared to historic levels. I’m not about to let this story repeat itself in Alaska, nor should you. If the mine is developed, future generations will inherit its legacy, and I predict they won’t look upon us fondly for repeating the same mistakes that killed salmon runs in the past.

Please comment during the scoping period on the Army Corps of Engineers’ Pebble Mine Environmental Impact Statement (EIS) and send those comments to your congressional representatives as well. Below you’ll find my scoping comments for the proposed mine. Feel free to copy and personalize them as you see fit. State your concerns now, so when the Army Corps of Engineers writes the EIS it will fully evaluate the mine’s impacts. Don’t let Bristol Bay’s salmon disappear because of our lust for copper and money.

The Corps is accepting comments through June 29, 2018. 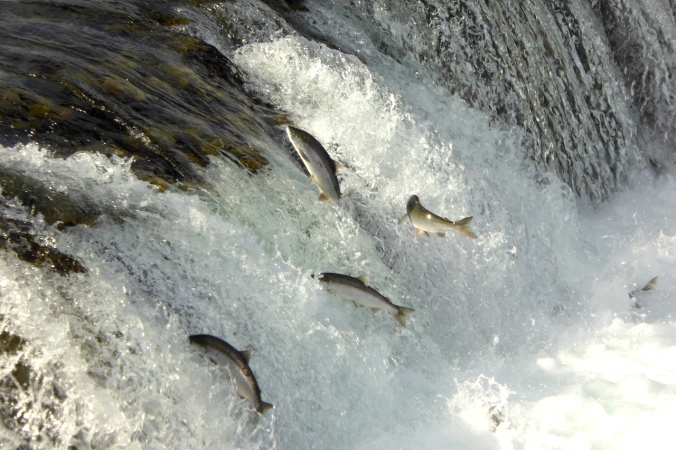 The proposed Pebble Mine and its associated infrastructure poses a substantial threat to salmon and wildlife across the Bristol Bay region. Pebble Mine will straddle the watershed divide between two of Bristol Bay’s most important salmon spawning and rearing areas. I remain very concerned with the mine’s potential to negatively impact the area’s fisheries and wildlife through its wastewater, tailings, and infrastructure.

A recent environmental impact statement from the Army Corps of Engineers, the Donlin Mine EIS, merely stated the purpose of the mine and the Corps’ authority to permit it (Donlin Mine Final Environmental Impact Statement – Chapter 1, pg. 1-4, 1-6). The purpose and need of the Pebble Mine EIS should be not be to simply define the project’s purpose (to mine ore) and define the Corps’ regulatory authority. It should be, as I propose, to:

Even at very low concentrations, dissolved copper is particularly toxic to salmon, interfering with their ability to navigate and avoid predators. Its effects can manifest over minutes or hours and persist for weeks (Hecht 2007). Can the mine’s wastewater treatment plan adequately remove dissolved copper and prevent it from entering the watershed?

The mine’s tailings also pose a great risk to fish. Any accidental discharge from the pyritic tailings ponds will significantly degrade salmon habitat. Open pit mines, even within the United States, have a poor record containing their toxic tailings. Most tailings dam failures occur at operating mines and 39 percent of such failures worldwide occur in the United States, significantly more than in any other country (Rico 2008). Earthquakes and flooding hazards increase the risk of a tailings pond dam failure in the Bristol Bay region, and tailings ponds cannot be drained in the event of flooding or dam failure due to their toxic contents. The probability of a M8+ earthquake, for example, is low from year to year but remains real at any given time. Therefore, the EIS must also evaluate whether the tailings ponds can be engineered to withstand the greatest potential earthquakes and floods expected over the next several thousand years.

After the mine’s 20-year active phase, the mining company proposes to store toxic pyritic tailings indefinitely under water in the former open pit. This seems to create the potential for acid mine drainage to leach into the watershed over hundreds or thousands of years. What geologic studies suggest this is a feasible long-term plan to store the tailings? Even if subaqueous storage in the former open pit prevents the tailings from oxidizing, what safeguards will prevent dissolved copper and other toxic metals from entering groundwater to eventually oxidize and acidify as it nears the surface in a different part of the watershed?

The mine’s supporting infrastructure also creates risks for salmon and wildlife. Although salmon can navigate and migrate through streams with high sediment loads, they do not spawn in these habitats. Erosion of sediments into streams can irritate the gills of fish, smother eggs, alter feeding habitat for salmon fry, and bury spawning habitat. The effects of road construction and vehicle traffic (estimated by the mining partnership to be 35 round-trip truck trips per day) on wetlands and fisheries should also be evaluated.

The road servicing the proposed Amakdedori Port and the port itself will fragment what is now an unspoiled region of coastline on Cook Inlet. McNeil River State Game Sanctuary is one of the most important brown bear refuges on Earth, home to the largest annual congregation of bears yet observed. The road and port have the potential to displace bears moving to and from the McNeil River and Katmai National Preserve areas. Frequent work and dredging at the port area will also displace wildlife in an area that now experiences very little human activity. Other alternatives to transport ore should be evaluated.

Finally, the EIS needs to address more than the 20-year operational phase, because the mine’s waste legacy will threaten salmon for thousands of years. Tailings stored in the former open pit won’t become benign in the near future and wastewater must be treated indefinitely. Also, the possibility of an expanded mine operating over a long time frame increases the threat to salmon, other wildlife, and clean water.

Combined, the Nushagak and Kvichak rivers support about 40% of Bristol Bay’s sockeye salmon. In 2017 alone, over 56 million sockeye salmon returned to Bristol Bay and over 19 million returning to Nushagak River, the largest in the river’s history. Salmon fishing in Bristol Bay is a billion dollar industry. While commercial fisheries generate the bulk of the salmon’s economic value, the area’s tourism is almost entirely based on salmon as well. Bristol Bay is home to dozens of premier sport fishing destinations, which harbor abundant populations of rainbow trout, Dolly Varden, arctic char, northern pike, lake trout, and grayling. The Bristol Bay area also hosts some of the densest populations of brown bears ever measured. Salmon are the most important food source for these animals, and the vast majority of people who visit Katmai National Park come to watch brown bears (Strawn 2015). After spawning, dead salmon fertilize the ecosystem with nutrients derived from the ocean, boosting the productivity of otherwise nutrient-poor area.

Considering the overwhelming economic and ecological value of salmon to the Bristol Bay region, Pebble Mine could displace thousands of workers and tourists if its safeguards fail to protect salmon. Without the energy and nutrients provided by consistently large runs of anadromous salmon, Bristol Bay’s freshwater and terrestrial ecosystems will quickly transition from one of richness to poverty. In many ways, this cycle is a positive feedback loop. The productivity of the area is reliant on large runs of salmon.

We’ve seen, repeatedly, salmon populations in the Pacific Northwest and New England decimated by habitat loss and pollution. Now we’re on the brink of repeating the same mistake in Bristol Bay. Pebble Mine should not be developed. It’s in the greatest interest of Bristol Bay’s fishing industry and culture, watersheds, salmon, and wildlife for the Corps’ EIS to fully evaluate the mine’s near and long-term effects. A failure to contain the mine’s toxic tailings and wastewater would directly impact two of Earth’s most productive salmon producing watersheds. The EIS must address potential groundwater exchange in the abandoned open pit, and whether the mining company can eliminate the risk of acid mine drainage. It must address whether the embankments for tailings ponds can withstand high magnitude earthquakes. It must address whether it’s even appropriate to build a mine whose wastewater will need to be treated indefinitely. It also must critically evaluate the mine’s supporting infrastructure, as it will potentially disrupt the world’s largest seasonal congregation of brown bears. In sum, the EIS must evaluate a worst-case scenario for salmon and other wildlife, since the possibility can’t be completely, or even reasonably, eliminated.

2 thoughts on “Pebble Mine Scoping Comments”