Despite the area’s formidable topography, the North Cascades are filled with lakes. On a hike late last summer, I glimpsed how many of them formed.

Monogram Lake sits in a small basin perched a few thousand feet above Cascade River. At this elevation, just shy of 5,000 feet above sea level, it’s surrounded by blueberry meadows and scattered woodlands of mountain hemlock and Pacific silver fir. It’s an inviting place to camp for a couple of nights, no matter if you want to lounge by the lakeside or strengthen your quads further by climbing to the surrounding ridges. 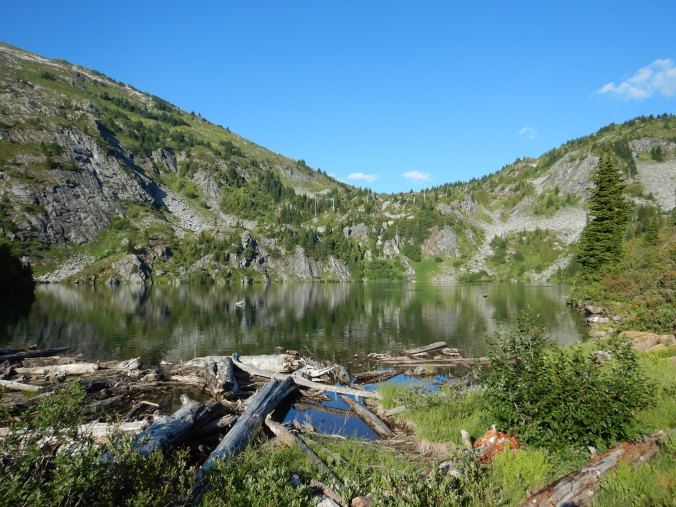 I hiked there late last August hoping to watch black bears feeding on blueberries. The blueberries were reaching peak ripeness when I arrived, but I found no black bears or even any fresh bear sign, so instead of relaxing at the lake I decided to explore the surround terrain and take in some of the iconic alpine views that make the North Cascades so famous.

Not having a specific destination in mind, I was free to wander. These are my most favorite hikes, when I travel more to see what might lie in front of me instead fixating on a pre-determined destination.

Bushwhacking around the lake, I passed through quiet sedge-filled wetlands… 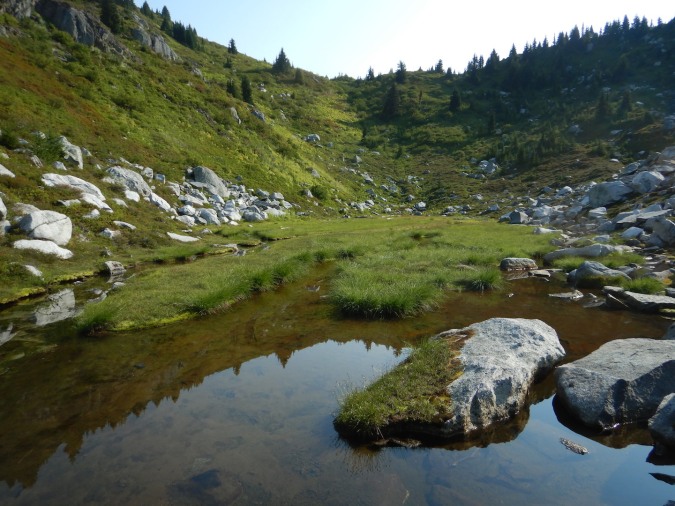 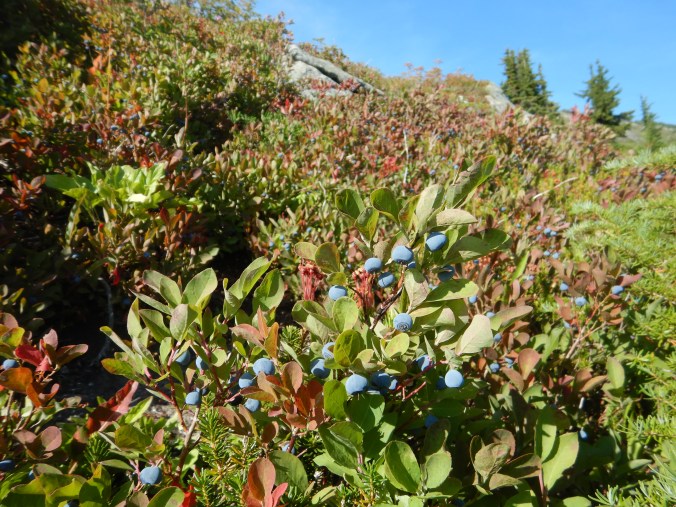 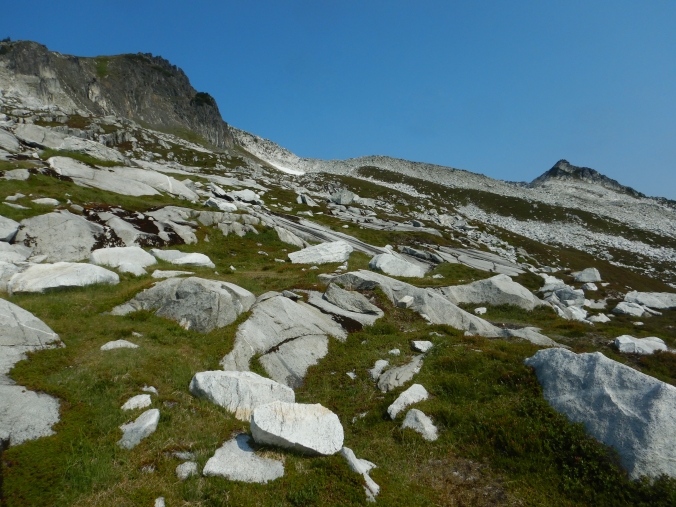 …to a glacier tucked in a pocket just south of Little Devil Peak. 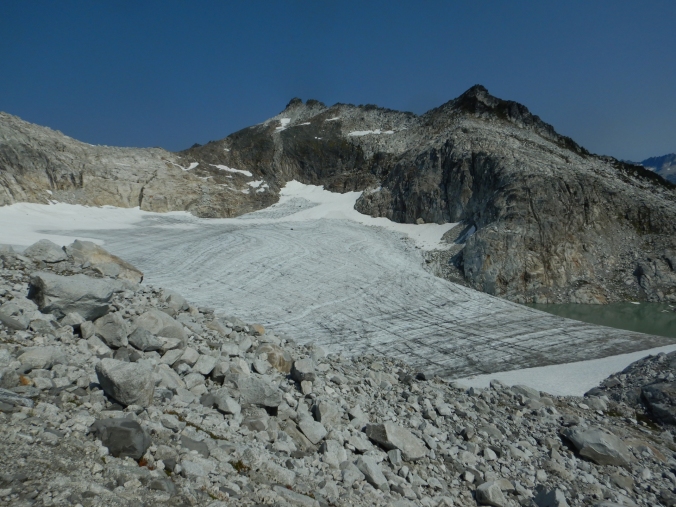 Here, I ate my lunch while contemplating the scene. It was a near perfect analog for the formation of the Monogram Lake basin.

Glaciers form when snow is compressed into mostly air-free ice and attains enough mass to deform and flow. Under the influences of gravity, ice deformation (high pressure within a glacier causes deeply buried ice to behave plastically), and lubrication from water at the its bed, glaciers move along the paths of least resistance. Due to their mass and size, they become powerful agents of erosion. They entrain rock, sand, and anything else as they flow. Forced along by moving ice, rocks at a glacier’s bed are especially erosive. Glacial erosion mills rock so effectively that much is pulverized into a microscopic powder called rock flour. This is the substance that gives glacial runoff it’s milky appearance and can color lakes turquoise.

Where ice had only recently receded at this particular glacier, the bedrock recorded plenty of evidence of the glacier’s past movement. 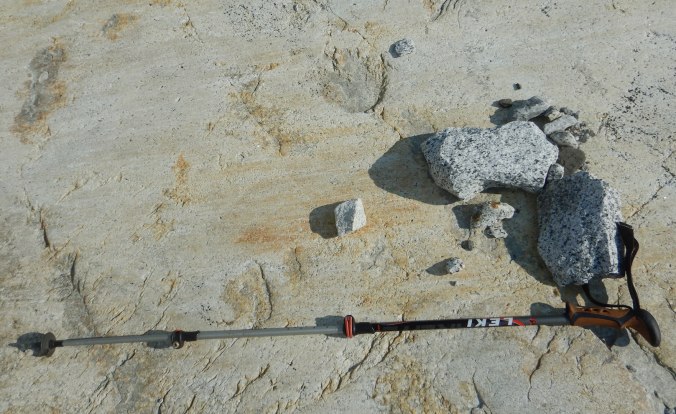 Many faint striations were scored into the bedrock near the glacier. The striations run roughly parallel to the hiking pole. 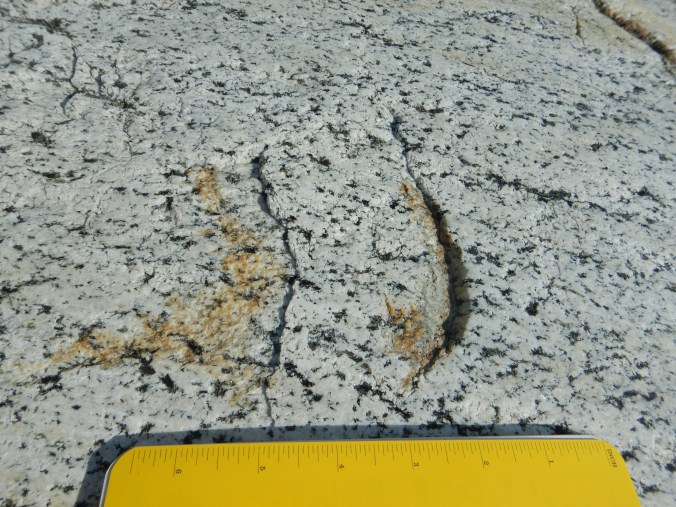 Chatter marks are small, crescentic grooves formed in bedrock by rocks frozen in ice. The rocks chip the glacier’s bed as they are forced forward. The convex face of the marks point in the direction of movement.

Since glacial erosion is most pronounced at a glacier’s base, if topography forces ice through a pinch point then it causes the glacier to carve the underlying land more deeply and quickly than at the glacier’s sides, a process called overdeepening. As ice retreats, overdeepened basins often fill with water. This is the origin of fjords and deep lake basins as well as cirques high on mountainsides.

Monogram Lake occupies a cirque, a half open and steep-sided valley or basin on the side of a mountain. Instead of a clear lake surrounded by meadows, it was once filled with ice just like the basin below Little Devil Peak. 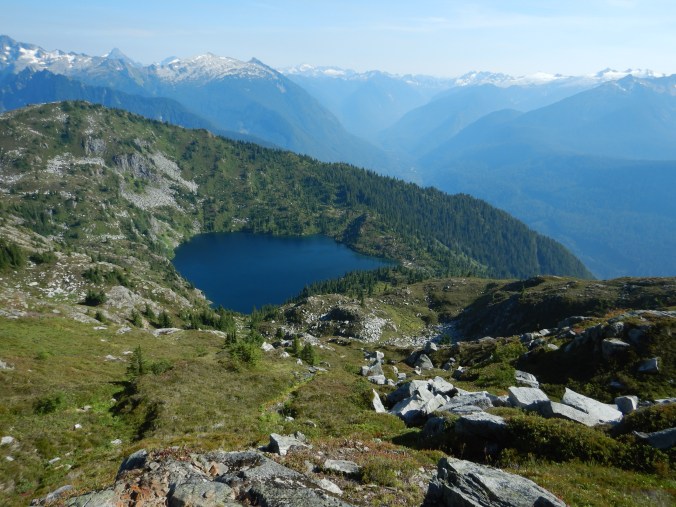 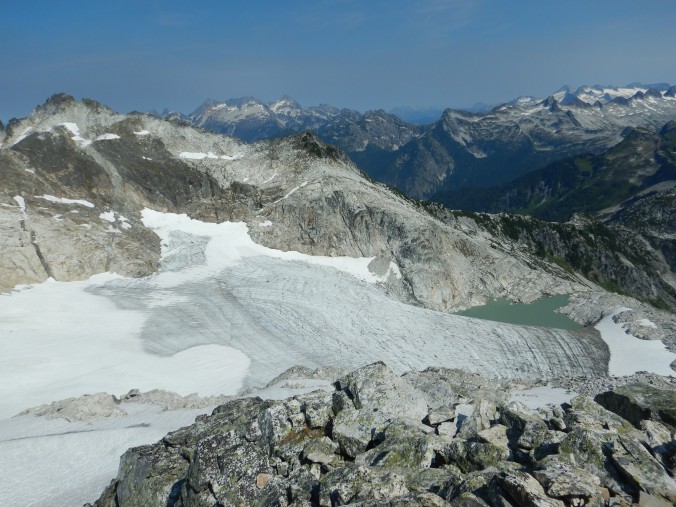 The glacier south of Little Devil Peak as seen from an unnamed peak above Monogram Lake.

Uniformitarianism is a geologic principle that, in sum, means the key to interpreting the past is to understand processes that occur today. Excluding the three hydroelectric reservoirs in the Skagit Valley, glaciers carved the basins for nearly every lake in North Cascades National Park and Lake Chelan National Recreation area. Even though I wasn’t around to see Monogram Lake emerge in the wake of glacial retreat, all the evidence I needed for this process was right before me.

14 thoughts on “The Origin of an Alpine Lake”