Across much of North America, tucked within isolated dens, a new generation of bears is beginning their lives.

Mother bears spent much of the last year preparing for this event. Although the timing varies among species and individuals, North America’s bears mate in late spring and early summer. The fertilized eggs, however, do not immediately implant in the uterus, undergoing only a few cell divisions before they enter a state of arrested development. During this process of delayed implantation, the female goes about her business while embryos remain in suspended animation. Implantation and fetal growth renew only close to the time she enters her winter den. Afterward, bear fetuses gestate for 6 – 8 weeks.

The gestation time is remarkably short for such a large mammal, and it produces especially tiny and helpless cubs. Brown bear cubs, for example, weigh a scant pound and measure only 8 – 9 inches long at birth, about the size of a beagle puppy. They are also born blind, lightly furred, and nearly immobile. Their ears are closed and their muzzles are short with a round, toothless mouth. Newborn cubs are so underdeveloped and small that they cannot maintain their own body heat in the den and must remain in contact with their mother to stay warm. About the only thing they can do is scream, which, not unlike human newborns, they employ frequently to gain their mother’s attention. It’s hard to imagine large adult bears so helpless, but they all start life this way.

Cubs are only 1/200th the size of even the smallest reproducing female grizzlies and commonly 1/500th or less for large adult brown and polar bears. In contrast, newborn human babies are an order of magnitude larger than bear cubs. A 10 pound child born from a 150 pound woman is 1/15th the size of its mother (yeah, I know that’s a big baby but the math was easy). Additionally, offspring born to large mammals are generally precocial, i.e. they are at least somewhat and sometimes highly mobile soon after birth. Bear cubs, however, are more akin to helpless hatchling birds or pinky mice. There is no parallel among placental mammals—only marsupials give birth to offspring as undersized as bears.

But why are bear cubs born purposefully premature? Why not just have a longer gestation time and birth larger, more independent cubs? The short gestation period and the relatively small size of bear cubs at birth both appear to be an adaptation to maximize the use of fat.

Bears are the only mammals that give birth while hibernating, a time when they do not eat, drink, urinate, or defecate. Survival during this time is dependent on stored body fat, but the paradigm poses a problem for expectant female bears. A developing mammal fetus cannot metabolize free-fatty acids, perhaps because these substances do not cross the placenta as readily as sugars and protein. So, as long as a bear tries to sustain fetal growth through her placenta, she needs to draw energy from her own body protein. Fetuses also produce bodily waste, which is transferred to the mother and adds to her physiological challenges. To cope, bears evolved an alternative strategy, one that allows her to give birth while hibernating, support the continued growth of cubs, and keep the family safe.

Unlike in the womb, baby mammals can metabolize fat shortly after birth and milk is the vector to deliver it. Bear milk is a particularly rich and nourishing substance. Brown bear milk, for example, is about 22% fat by volume. Polar bear milk is even richer, a whipping cream composed of over 30% fat. By shortening the gestation period, mother bears trade placental nourishment (mostly protein and sugar) for mammary nourishment (mostly fat) and tap into the one resource they have in abundance. 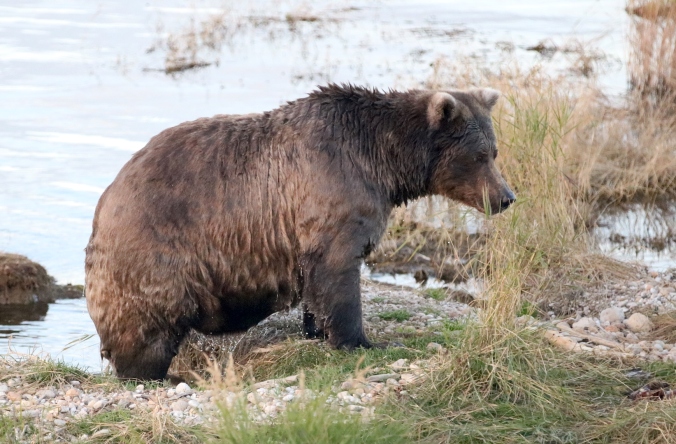 Female bears utilize their fat reserves to support the growth and nourishment of their cubs.

On a diet of fatty milk, a brown bear cub can gain about a 1/5 of a pound of body mass per day, weighing about 5 pounds when one month old and 15 – 25 pounds by 90 days. Not coincidentally, this is about big as they would be if gestation was of an “expected” length like other placental mammals. The den, therefore, becomes a surrogate womb, protecting the family during the most vulnerable time in their lives. 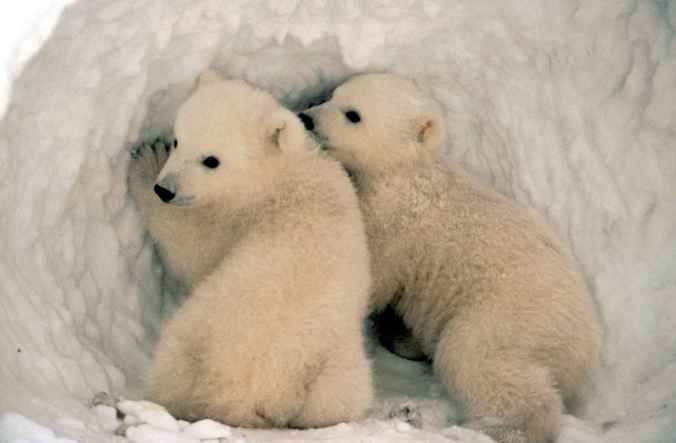 Polar bears play at the entrance to their mother’s den. These cubs are probably several weeks old. U.S. Fish and Wildlife Service photo.

Bears face many obstacles to survive and reproduce, not the least of which is winter famine. Hibernation provides bears with the ability to outwit winter by surviving on accumulated fat, but during this time a female bear must support the growth of her cubs with nothing more than the energy stored in her body. Given the challenges posed by gestation, hibernation, and winter famine, the birth of a bear represents a remarkable and unparalleled feat of mammalian adaptation.