Although they probably inhabit all of Katmai National Park, wolves are infrequent visitors to Brooks River, and seeing a wolf on the bearcam is a noteworthy occasion.

What happens when a wolf approaches a waterfall full of bears?

This wolf appeared quite nervous as it tried to poach salmon carcasses from the riverbank this week.

Late one evening at the end of June and about a dozen miles from Brooks River, I was lucky enough to see wolves compete with a bear for food along the middle reaches of Margot Creek.

At the beginning of the video, a blob in the middle of the creek represents the bear as it laid on the moose carcass. Two park rangers observed the same bear on the moose about seven hours before (no one witnessed how the moose died). When presented with a large animal carcass, bears will often bury it and/or sleep directly on it to protect it from other scavengers.

Not long after I started to watch the bear, a wolf emerged from the forest. It circled the bear, perhaps testing how tolerant or defensive the bear might be. Bears are quick, capable of outrunning any human, but they aren’t as fast as a wolf, and wolves know this. Therefore, the wolf was in little danger from the bear as long as it remained wary and stayed out of the bear’s reach. This didn’t stop the bear from charging the wolf several times though (only a few of which I was able to record). Despite the bear’s defensiveness, the wolf was persistent. 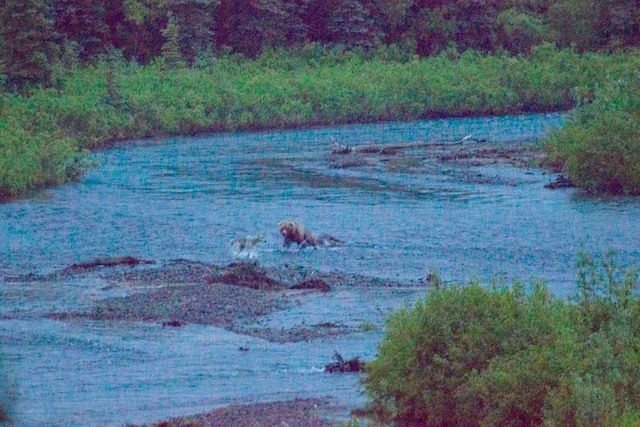 A bear defends a moose carcass by charging a wolf who approached too closely. Photo courtesy of Anela Ramos.

Soon after the wolf appeared, the bear left the carcass and a second wolf arrived. The wolves didn’t appear to be in sufficient numbers or aggressive enough to chase the bear away. Perhaps the wolves were enough of an annoyance that the bear was unable to rest or the bear could’ve been chilled by lying on the carcass in the creek for several hours. Whatever the reason, after the bear left for good the two wolves quickly began to gorge on the moose. They focused their efforts on the moose’s abdomen, thoroughly eviscerating it within fifteen minutes. 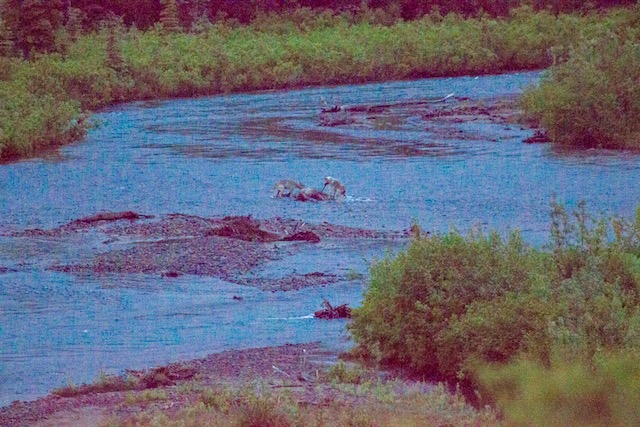 Two wolves tear into a moose carcass soon after a brown bear left it unattended. Photo courtesy of Anela Ramos.

Shortly afterward, stomachs bulging with moose entrails and meat (wolves can eat over 20 pounds of food in a single feeding session), the wolves sauntered into the forest.

Events like this happen in many places where wolves and bears share habitat, but in Katmai it might be more intense in spring and early summer before spawning salmon become abundant across the ecosystem. Bears often steal the show at Katmai, but wolves also prowl the landscape, following their own strategies for survival and sometimes competing directly with bears for food.

4 thoughts on “A bear, wolves, and a moose carcass”