For my book on Brooks River’s bears and salmon, I find myself digging deep into natural history and ecology of brown bears. Sometimes I uncover research that challenges my long held assumptions. Take the difference between brown and grizzly bears, for example; something I often said was mostly based on geography and diet. As I wrote for Katmai’s website:

These geographic and dietary distinctions seem simple enough. However, there is little scientific evidence to support it. Both brown bears and grizzly bears exist, but the differences between them aren’t what I had long assumed. 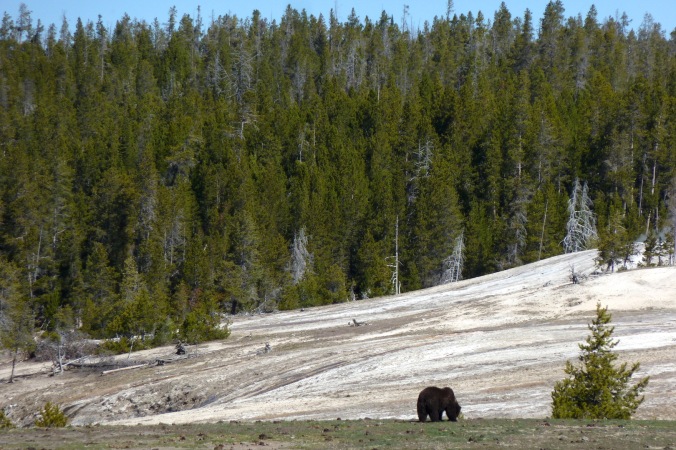 Although North American brown, grizzly, and Kodiak bears belong to the same species, Ursus arctos, bear taxonomy underwent many revisions before scientists reached this conclusion. In the nineteenth and twentieth centuries, taxonomists frequently lumped and split brown/grizzly bears into many different species and subspecies. The separation peaked in 1918 with the publication of C. Hart Merriam’s Review of the Grizzly and Big Brown Bears of North America in which Merriam proposed around 80 (not a typo) species and subspecies of North American brown bears. Taxonomists like Merriam relied on morphological characteristics that could be seen or observed to classify living and extinct organisms. Warm-blooded animals that have hair, breathe air, and produce milk for their offspring are mammals, but warm-blooded and air-breathing animals that lay eggs, have feathers and toothless beaks are birds. These are greatly simplified examples, I realize, and such tidy and clear distinctions aren’t necessarily common in nature. They often become more difficult to resolve at the genetic and species level, especially in cases of hybridization or when taxonomic distinctiveness is based on subtle physical differences.

Merriam’s nuanced classifications of brown and grizzly bears were based on differences in skull morphology and dentition, characteristics he examined painstaking detail. Among taxonomists, Merriam was a splitter. On southeast Alaska’s Admiralty Island alone, he classified five distinct species . In the Katmai region, Merriam described two species, Ursus gyas for the Alaska Peninsula and Ursus middendorffi for Kodiak Island , as well as others for bears living in the Cook Inlet area and on the Kenai Peninsula.

If you think his classifications of brown/grizzly bears was a little over the top, you’re not alone. Merriam foreshadowed opposition to his conclusions when he wrote in his Review, “The number of species here given will appear to many as preposterous . To all such I extend a cordial invitation to . . . see for themselves.” And they did. Most of the species or subspecies described by Merriam were later regarded as local variations or individual variants. While all of Merriam’s species have since been lumped together as U. arctos, in the mid 1980s as many as nine extant or extinct subspecies of U. arctos were recognized in North America , but the only names for North American brown bear subspecies in still widely used are U. a. horribilis, the grizzly bear, and U. a. middendorffi, the Kodiak bear. Recently, however, even these classifications have come under question.

In hindsight, it’s easy to scoff at Merriam’s conclusions. Could there really be dozens of brown bear species in North America? Within the methodologies and knowledge of his era, his results aren’t that far fetched. Little was known about the behavior, growth rates, ecology, and population dynamics of North American bears in the nineteenth and early twentieth centuries. Given access to the same tools and information as modern taxonomists, Merriam may have discovered grizzly and brown bears can’t be so easily divided by differences in skull and tooth shape.

Ursus arctos is one of the most widely distributed mammal species on Earth. Historically, brown bears were found from the British Isles south to North Africa and east across northern and central Asia to Alaska and most of western and central North America. Two to three million years ago, they split from a common ancestor shared with black bears . The oldest brown bear fossils are from China and date to about 500,000 years ago. By 250,000 years ago, they spread to Europe. During the last 100,000 years of the Pleistocene, bears immigrated and emigrated across much of the northern hemisphere as climate and habitat dictated. When continental ice sheets advanced, available habitat shrunk and bears became isolated into separate populations. When the ice receded, bears dispersed into the new territory. Beginning around 70,000 years ago, the first brown bears moved into North America. While we know when and where bears lived and live from fossils and historical records, this doesn’t necessarily deduce the genetic relatedness of modern populations.

Phylogeography is a branch of phylogeny, the evolution of an organism or group of related species or populations. As such, phylogeography traces the distribution of genetic variation through time and space. In this regard, mitochondrial DNA (mtDNA) is especially useful to track female ancestry. MtDNA  resides in the mitochondrion, a cell’s powerhouse, and is inherited from the mother only, unlike nuclear DNA which is a recombination of genes from both parents. According to mtDNA analysis, there is no divide between brown and grizzly bears based on an animal’s relationship to the coast or marine food sources, nor does it support the status of U. a. horribilis or U. a. middendorffi or any other historical subspecies in North America. The only historic classification that holds is at the species level—Ursus arctos. Instead, matrilineal ancestry suggests brown bears in North America fall into three main clades.

Clades are groups of organisms evolved from a common ancestor and consequently share a genetic relationship. The three North American clades, as well as others in Europe and Asia, are believed to be descended from brown bears living in isolated populations in Asia during the late Pleistocene . Since then, the mtDNA has remained geographically separated due to the tendency of female brown bears to be homebodies. Female brown bears are philopatric. They tend to remain near or have partly overlapping home ranges with their mother and do not rapidly invade areas already occupied by other brown bears . This can prevent or at least greatly slow mtDNA from mixing into other bear populations, even long after significant barriers like ice sheets have disappeared.

Approximate range of brown bear clades in North America based on mtDNA. Different clades are represented by horizontal and vertical lines. The solid red circle marks the location of brown bears on the ABC islands.

Bears on the ABC Islands are the most genetically distinct of all Ursus arctos. Their mtDNA aligns them more closely to polar bears than to other brown bears , a genetic uniqueness most likely resulting from interbreeding with a small number of isolated polar bears at the end of the last ice age. Since then, female brown bears on the islands have not spread their polar bear genes to the mainland. Bears in British Columbia, Alberta, and into the lower 48 represent another lineage who arrived in Alaska around the same time as the ancestors of the ABC bears. During a warm interglacial period, some of these bears moved south into the mid continent before the ice advanced again and sealed them off from their brethren to the north.

All other brown bears in northwest Canada and Alaska, including those on Kodiak, belong to a clade that dispersed from Asia in two separate waves. Those in northwest Canada arrived first, perhaps as early as 33,000 years ago. Bears now occupying mainland Alaska represent the last pulse of ursine migrants onto the continent, arriving just before rising sea levels flooded the Bering Strait and closed the land bridge between Asia and North America. Excluding the ABC islands, all Alaskan brown bears belong to this pedigree, which stretches from northwestern Canada and Alaska west across Russia and into Europe and includes most of the world’s brown bears.

The results from mtDNA only convey information about the maternal line, however. MtDNA cannot trace genes spread exclusively by male brown bears, so it underrepresents the role of males in gene flow. Male brown bears have larger home ranges and disperse away from their mother’s home range more readily than females, especially during their first few years of independence. Males do carry one important bit of DNA that females don’t—the Y chromosome. Like mtDNA, it is only inherited from one parent, but unlike mtDNA it can only be passed from father to son, making the Y chromosome an important marker to trace paternal gene flow and diversity.

While mtDNA shows particularly strong clade differentiation  across the entire range of Ursus arctos, geographic variation in the Y chromosome of brown bears is much shallower . According to analysis of the Y chromosome, no deep genetic or geographical divergences could be found from bears in Eurasia or North America. Brown bears on the ABC islands and mainland Alaska, for example, share closely related haplotypes (a group of genes inherited from a single parent ) found in the Y chromosome. Even brown bears from populations as separate as Norway and the ABC islands have been reported to carry highly similar Y chromosomes . Male genes, therefore, flow across clades.

Within mammals, mitochondrial DNA can only be inherited through the maternal line. The Y chromosome is only passed from father to son. MtDNA tends to stay within genetically related clades because female bears are philopatric. Male bears, due to their inclination to disperse farther and have larger home ranges than females, can spread Y chromosomes over bigger areas. Unlike nuclear DNA, neither mtDNA nor the Y chromosome are a mix of maternal and paternal genes.

This isn’t to imply male bears from the Yukon immigrate to Europe or vice versa, just that males are more apt to wander and set up home ranges well away from their mother. If female brown bears, due to their philopatry, differentiate a population’s genetics over time, then male bears homogenize it. In other words, female brown bears like to stay in familiar terrain, but males often spread their seed far and wide.

With evidence of geographically isolated clades through mtDNA but not in the Y chromosome—can we still divide brown bears into biologically significant units? Even though genetic research adds another dimension to our understanding of wildlife, morphology remains an important way to differentiate species, and subspecies don’t necessarily need to be from separate or unique ancestry to be worth protecting. Grizzly and brown bears still exist, just not along a clean geographic and dietary divide. Where we draw the line is less important than the overall conservation of bears. Populations of brown bears—whether they are from Katmai, Kodiak, or Yellowstone—remain ecologically and culturally special no matter their genetic distinctiveness. Bears in Yellowstone are geographically and (at least currently) genetically separated from other “grizzlies.” Kodiak bears aren’t genetically distinct enough to justify them as a separate clade even though they have been isolated from mainland bears for approximately 12,000 years. Hypothetically speaking, if bears are extirpated from Kodiak or Yellowstone then they won’t be coming back and a valuable repository of genetic diversity will be lost forever.

The line between a brown bear and a grizzly, as I used to define it, was always tenuous at best. (Should grizzlies in interior Washington, British Columbia, and Idaho—who may have fed on salmon before runs in the Columbia and Snake watersheds collapsed—be considered brown bears?) Now through DNA analysis we know Ursus arctos cannot be so arbitrarily split based on their geographical closeness to the ocean. It’s still ok to say grizzly, Kodiak, or brown bear—the names can still be incredibly powerful and useful—but maybe the only truly accurate name for them is Ursus arctos.

5 thoughts on “The Difference Between Brown and Grizzly Bears”