Dumpling Mountain, in west-central Katmai National Park, rises gently between Naknek Lake and Lake Brooks. Overridden repeatedly by glaciers during the last ice age, its slopes contour less abruptly than taller mountains to the east. About half the mountain’s topographical prominence lies above timberline. The upper mountain is a chilly, wind-swept place (especially in mid October) where only hardy, ground-hugging shrubs and forbs grow. 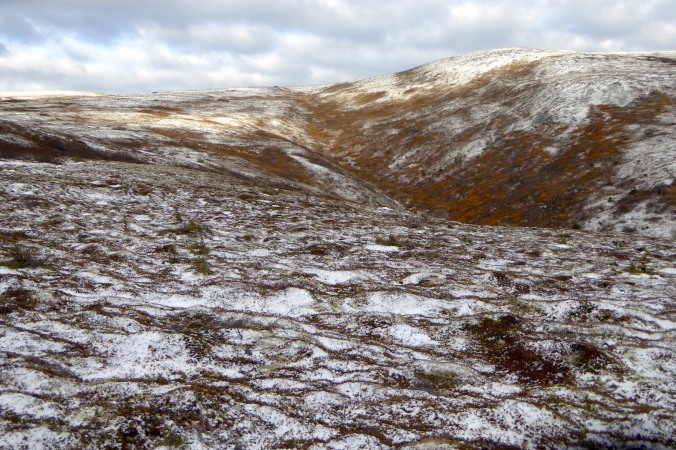 The Dumpling Mountain Cam recently captured footage of a mother bear and three yearling cubs there.

The Dumpling Mountain Cam is located about 2,150 feet above sea level on the mountain’s dry alpine tundra, just under 300 feet below and .75 miles distant from the mountain’s 2,440-foot high summit. I hiked up Dumpling Mountain dozens of times, mostly to escape the relative hustle and noise of Brooks Camp, but I rarely saw bears on the mountain. Tracks, sure. Scat, definitely. But bears? Almost never. They don’t use the mountaintop as frequently as other areas. So why would bears venture nearly to the summit of Dumpling now? Are they migrating to a denning site?

Last fall, in a blog post for explore.org, I discussed what is known about the denning habits of Brooks River’s bears. From limited radio tracking studies done in the 1970s, we know these bears probably den on steep, well-vegetated slopes that collect a lot of snow. The same study determined Katmai’s bears denned, on average, at 1,300 feet in elevation.

Dumpling Mountain offers much suitable denning habitat. Although none of the bears radio-collared at Brooks River in the 1970s were tracked to it, I found at least three areas with bear dens in my explorations of the mountain. None are visible within the Dumpling Cam’s viewshed, but they aren’t very far away either. 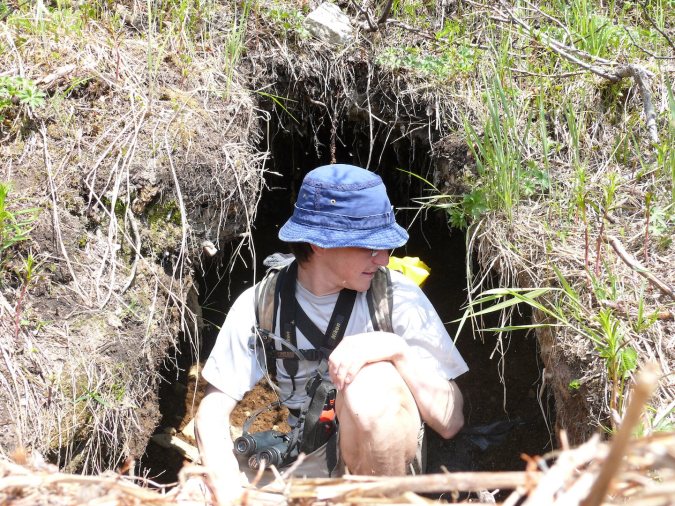 Yours truly sits at the entrance of a bear den on Dumpling Mountain.

Bear dens are cozy places. An entrance tunnel leads to a sleeping chamber, which is usually just large enough for the bear crawl into and turn around. Brown bears have the strength and endurance to dig their dens quickly, but den excavation typically takes place over several days. They may also make several excavations near their denning site, perhaps aborting these first attempts due to poor soil conditions.

Bear abundance at Brooks River peaks in late September and early October then decreases coincident with fewer spawning salmon. The bears’ migration away from the river doesn’t necessarily mean they’ll immediately head to their denning site. Bears can still find opportunities to feed elsewhere, even on Dumpling.

These bears on Dumpling may not have been moving to a denning site. Instead, they could’ve been there to eat. Their time on camera showed them traveling, playing, and grazing. Crowberry (Empetrum nigrum), alpine or bog blueberry (Vaccinium uliginosum), and lingonberry (Vaccinium vitus-vitae) all grown on the mountain’s tundra and can be important, and easily accessible foods for bear. Wild berries in Katmai are a fickle crop though. Some years, berry plants produce bumper crops, while in others I was hard pressed to find many berries at all. When one or all are abundant, however, berry-filled scat reveals the bears’ motivation on the mountain. In October, all three species can linger on the bush, but lingonberries are most likely to remain abundant into fall.

Dumpling Mountain offers several things bears need—food in the form of seasonally abundant berries, open space relatively free of human disturbance, and pockets of prime denning habitat. Bears using the mountain, especially in the fall, could be there to locate a denning site, to graze frozen berries, or simply on their way from one place to another.