Rain falling on a tent is the least motivating sound in the world and I heard it off and on through my last night in the Brooks Camp Campground. But by dawn, the rain nearly ceased and since this was my last morning to watch bears, I wasn’t about to let some drizzle get in the way of bear watching.

First, I had to get to the river. The campground is set almost a half-mile from the mouth of Brooks River. The walk between is easy enough, mostly flat and over crushed gravel trails, unless bears get in the way. After exiting the campground’s electric fence (5,000 volts of shock value), I stepped on to the beach to check if it was free of bears.

The trail to and from the campground parallels the beach, a place bears utilize frequently as a travel corridor or a place to rest. When bears are on the beach they are generally too close to the campground trail for it to be used. That morning, in the dim blue-gray light of an overcast dawn, I could see one bear sleeping between the visitor center and me. Giving this bear space was simple enough, all I had to do was swing through the forest and follow the faint trace of the waterline that ran to the campground. The risk in this plan though was the limited visibility in the forest. I moved slowly, watching and listening carefully for bears. The few belly holes along the route were empty and I safely reached the main trail with only a few moments lost.

At the river mouth, plenty of bears were active. 409 and her yearlings fished near the bridge and 410 stood still on the spit when a new family of bears appeared, one that I hadn’t yet seen in person. It was 435 Holly and her two very plump spring cubs. 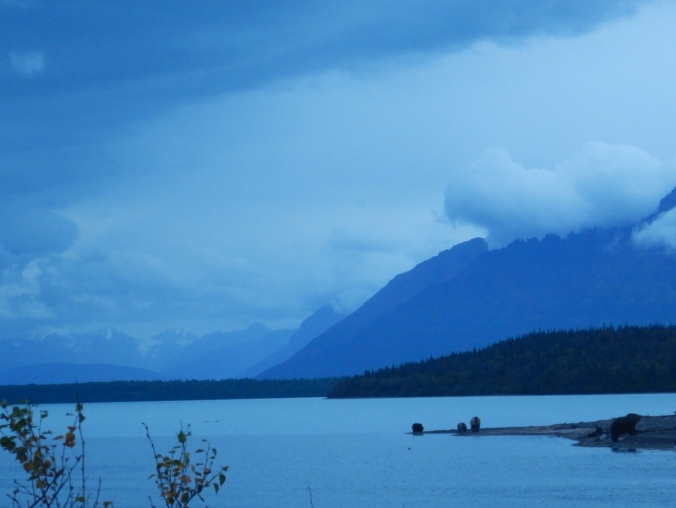 435 Holly and her two spring cubs stand near 410 on the spit at the mouth of Brooks River.

Crossing the river wasn’t as straightforward as the previous morning though as 409 and her two yearlings fished within a few yards of the bridge. As the family slowly made their way downstream, I prepared to speed walk across the bridge when the opportunity arrived. Just as 409 and her cubs waded far enough downstream of the bridge (more than 50 yards) I crossed quickly, and just in the nick of time. As soon as I reached the lower river platform, 854 and her cubs appeared on the Corner where I was standing.

Photo opportunities are limited with my durable but optically limited waterproof camera. Still, over the next 150 minutes, I watch 14 different bears (23 counting dependent offspring) using the lower Brooks River.

854 Divot and her yearling cubs

With my time at Brooks Camp running low, I ventured to the falls for one last look at the largest of the river’s bears. 32 Chunk, 151, 474, 480 Otis, and 747 round out the adult male roster this morning. When 747 sees 474 walk upriver, 747 directly approached 474. Both of the palindromic-numbered bears began to cowboy walk and mark trees, 474 on the shore near the platform and 747 on the island downstream of the falls. When 474 moved behind the platform, likely as a subtle move to avoid 747, the larger 747 marked the same tree and urinated in the same places as 474. Out of the water, 747’s true size is revealed. He’s a giant of a bear, far fatter and larger than any other on the river.

Bears use scent marking and body posturing to communicate their relative level of dominance. This morning, 474’s avoidance of 747 and 747’s subsequent scent marking of the same spots indicate 747 was the dominant bear, which is not surprising based on his gigantic proportions.

Before I left the falls for the final time (this year at least), I watched a young subadult bear fish the lip. She appeared well practiced in this spot. Bears rarely fish the lip of the falls in late summer, a time when nearly all salmon have reached their spawning site and lack the energy reserves or motivation to surmount the falls. The abundance of silver salmon in the river this year, however, allowed her to exploit this fishing spot during a time when it usually wouldn’t be worth visiting.

This young subadult has fished the lip of Brooks Falls often recently. While bearcam viewers have speculated she might be one of 402’s emancipated cubs, this bear looked too big for a 2.5 year-old.

I encountered no significant delays on my return to the lodge to check in for my flight out. Lots of bears milled around the lower river, but I remained on the beach in front of the lodge to sit and watch 435 Holly and her cubs rest nearby. 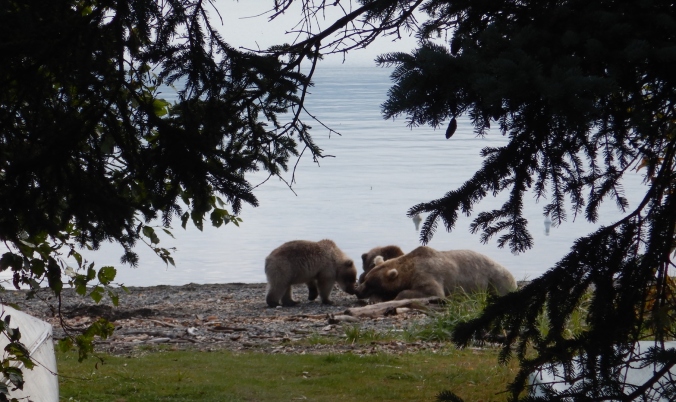 Brooks River is a special place, unique among national parks, and I felt fortunate to spend time there once again even if the visit was too short.