The bear hierarchy is fluid. Bears jostle constantly within it, gaining and losing rank as they grow into adults and age into older bears. In 2017 at Brooks River, one bear has asserted his dominance over all others in ways he’s never done before. There appears to be a new dominant male on the river and he’s known as 32 Chunk.

In 2011, I began recording interactions between bears at Brooks Falls, noting who displaced who, who avoided who, and which bears were courting, stealing fish, and playing together. Out of hundreds of interactions I witnessed, one bear was consistently and clearly dominant over all others, 856.

From 2011 to 2016, 856 wasn’t displaced once. I only noted him yielding on very rare occasions, like when he faced a particularly defensive mother bear. No other bears even seemed to challenge him. 856 ascended to the top of the hierarchy rather quickly in 2011, outcompeting other large males like 814 Lurch and 747, and for many years remained the river’s most dominant bear.

Life at the top of the hierarchy is difficult, however. Other bears are subordinate, but not subservient, to more dominant animals. If injury, illness, or age weakens a dominant bear then others will not hesitate to usurp their position, gaining greater access to food and potential mates. Other bears, often younger and stronger, are more than willing to take your spot if given the opportunity.

In the video above, 856 is the bear in the jacuzzi (the plunge pool below Brooks Falls) while 402, an adult female, stands on the lip. Notice how 856 turns to face the bear approaching from the far side of the river. This is 32 Chunk.

856 backs out of the jacuzzi to avoid 32 Chunk. He then goes to the lip where 402 stands, but 32 Chunk follows. Above the falls, 856 makes no attempt to challenge Chunk. 856 stands and watches as 32 turns away from his competitor, like dominant bears are apt to do, and walks out of the frame.

Generally, when two bears of approximately the same size and disposition meet for the first time, both bears posture openly as they evaluate each other’s size and the potential to do physical harm. 856 yielded quickly and readily to 32, so they have encountered each other before the video above was recorded. During a previous encounter 32 Chunk may have asserting his dominance even more clearly, hence 856’s willingness to yield. 856 simply saw 32 approach and instantaneously realized he could not challenge the larger 32, so he backed away to avoid picking a fight he probably wouldn’t win. (Many, if not most, interactions between bears are like this. They are defined by avoidance.) 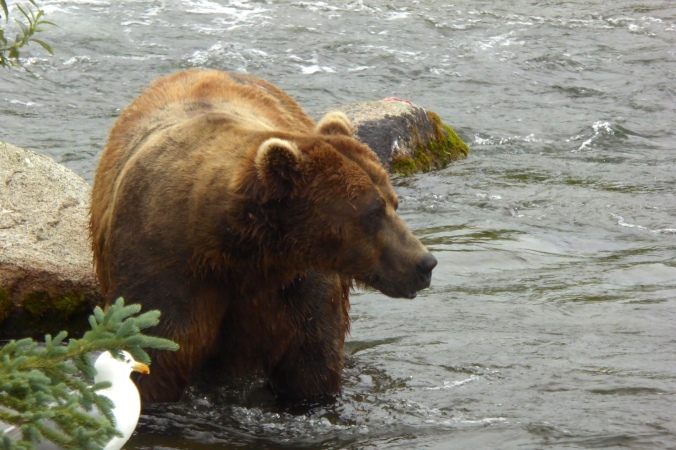 32 Chunk in 2014, while he ranked in the middle of the bear hierarchy for adult males.

Nature abhors a vacuum. No niche is left unfilled within the bear hierarchy. 856, perhaps weakened by injury or age, appears to no longer be the most dominant bear at Brooks River. His younger competitor sensed weakness and exploited it. This isn’t a contest of longevity though. During his time as the most dominant bear, 856 had free reign over the best fishing spots and went unchallenged for access to females in estrus. For years, he grew large and strong, probably siring more than one litter of bear cubs along the way. Now 32 Chunk (and possibly other bears like 747) hold those advantages.

856 remains a large bear and his size will continue to allow him great access to fishing spots at Brooks River. Bears grow up quickly, gaining the strength and skills necessary to survive a harsh, competitive world. Eventually though, the competition catches up.