In February, I discovered wolverine tracks in the snow. After mentioning the tracks to a resource management specialist at North Cascades National Park, we decided to set up one of the park’s motion sensor trail cams hoping to capture photos of wolverines or any other animals that might wander by. The cam didn’t capture images of any wolverines, but it did reveal the presence of other large critters. (In this post, all photos from the trail cam are courtesy of North Cascades National Park Service Complex).

On March 20, I mounted the cam on a tree with a clear view of an unplowed, snow covered bridge over Stehekin River, surmising that the relative ease of crossing the bridge would funnel wildlife across it.

After setting up the cam, the first photos capture me skiing away.

Nothing appears on the cam until March 30 when a mountain lion waltzes by! 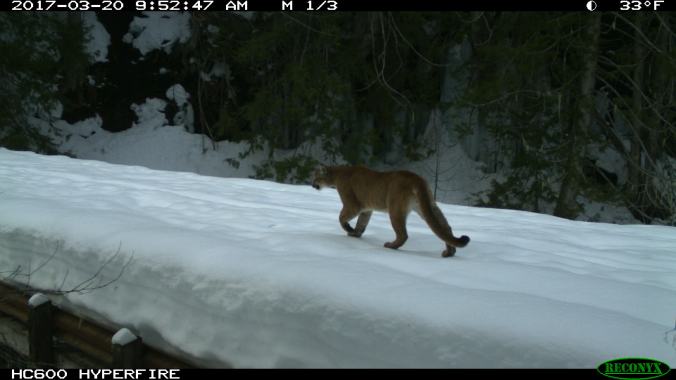 I was surprised the mountain lion was in this habitat during late March. Many deer, the primary prey for Washington state’s cougars, inhabit the lower Stehekin River valley, but I had seen no tracks of those animals anywhere within five miles of the bridge. The four feet of snow in this location was still prohibitively deep for deer. Perhaps this was a male seeking females or simply one of the resident lions moving through its territory. I’m not sure, although I found a pair of lion tracks a couple of miles north along the Pacific Crest Trail three days afterward.

After swapping out the cam’s memory card on March 23…

…I left the cam alone until April 3. When I returned I noticed some large, semi-fresh tracks post-holed across the bridge. Backtracking the animal’s movement, I found it walked right under the cam before crossing the bridge. Interestingly, the cam took many photos of an empty bridge the evening before I arrived. Something had nudged the cam, triggering it for 13 seconds according to the photos’ time stamps. One photo in the sequence is completely black as if something briefly covered the lens.

The culprit was revealed a few seconds later. 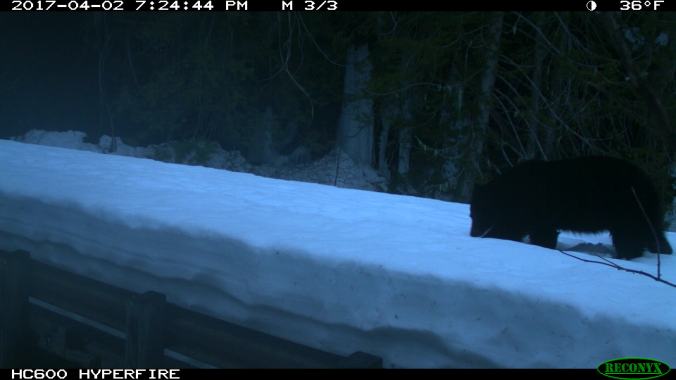 Bears are extremely curious. This one found the cam and investigated it seconds before walking across the bridge. Since black bears in the northeastern corner of the North Cascades begin to emerge from hibernation in early April, it may have been fresh out of the den. On the other side of the bridge it’s tracks continued straight up the hillside disappearing into the forest.

I know these animals live here with me. I see their tracks and scat somewhat often, but I encounter the living individuals less frequently. For me, the cam provided an enjoyable, albeit brief, glimpse into their lives.