We found ourselves hanging over the brink of an abyss of such immensity that, as the event proved, we were powerless even to guess its size. Down, down, down, we looked until the cliff shelved off and we could follow it no further.

Standing on the rim of the Mount Katmai caldera, staring at the gaping hole where a mountain once stood, elicits a profound awe. At the caldera and across the Valley of Ten Thousand Smokes, the Earth’s power and ability to foment change is laid bare.

About a year ago, I disappeared into one of the most unique landscapes on Earth, the Valley of Ten Thousand Smokes in Katmai National Park, a trip I partly chronicled in a blog post for explore.org. I hadn’t specifically planned on ascending to the caldera rim on that trip, knowing that the weather along the crest of the Aleutian Range is fickle at best and an inviting window of opportunity may never materialize. When I woke at daybreak on June 10, 2019 to see a cloudless sky though, I left my base camp eager to reach one of Katmai National Park’s most spectacular features.

I slept the previous night at Novarupta, the lava dome that marks the eruptive center of the 1912 Novarupta-Katmai eruption, the largest eruption of the twentieth century and one of the five largest volcanic eruptions in recorded history. The lava dome represents the eruption’s last gasp, forming anywhere from days to months after the 60 hour eruption waned on June 9, 1912. 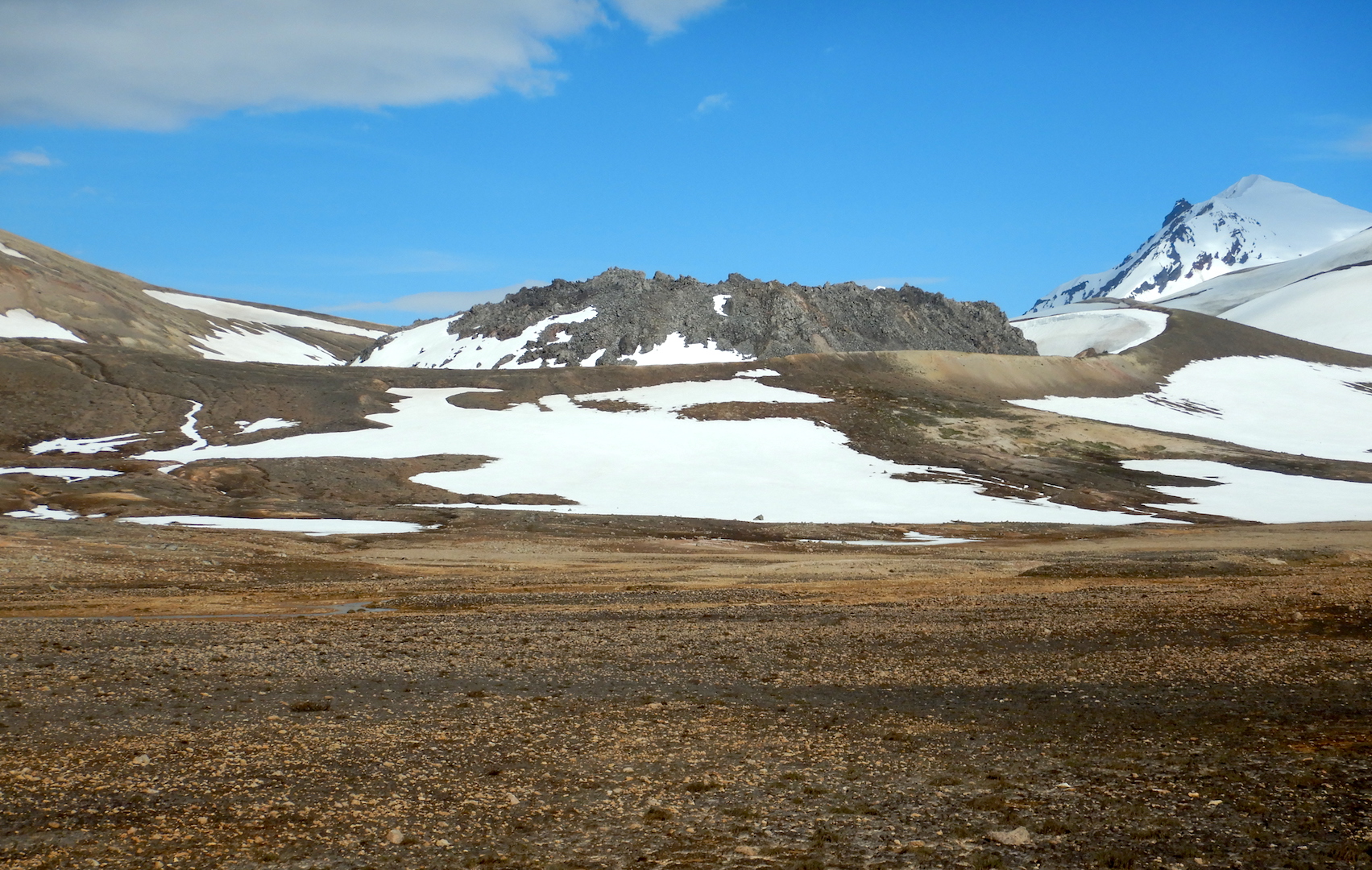 I began walking not long after the first light of dawn cast a pink alpenglow on the surrounding volcanoes. The rivulets of snowmelt where I gathered drinking water the prior evening had run dry as overnight temperatures dropped below freezing. Thankful for the firm footing, however, I traveled quickly across frozen snowfields to the base of the Knife Creek Glaciers, a badlands of pumice-covered ice attached to the north faces on Trident and Katmai volcanoes. 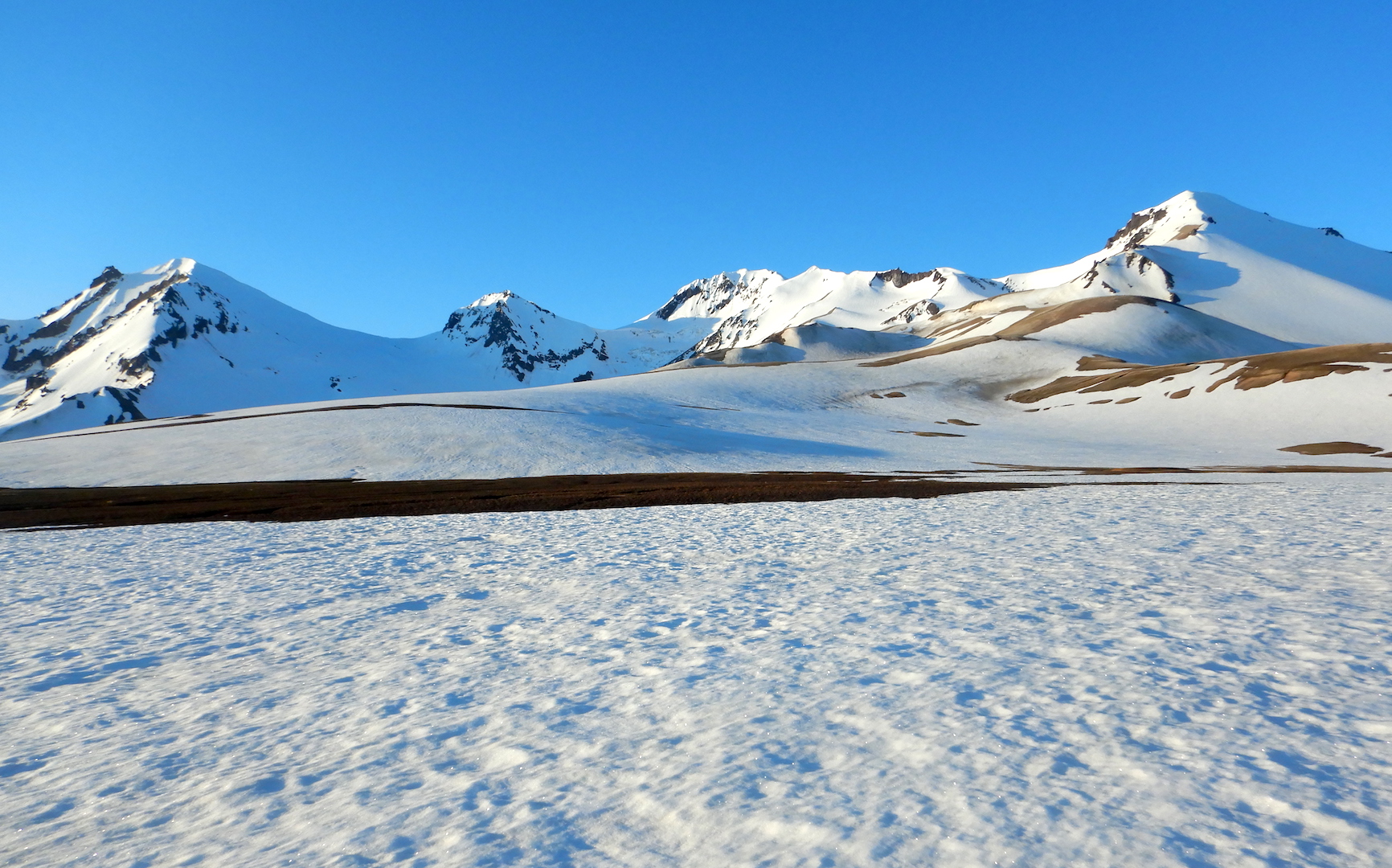 Not one, but many meltwater streams pour from the snout of these glaciers, and the permanent channels have eroded deeply into the pyroclastic deposits that form the Valley of Ten Thousand Smokes proper. Finding places to hop over or ford these streams is straightforward, although tedious work as you climb in and out of their past and present floodplains. They can be crossed most safely within a few hundred yards or less of the base of the ice. Farther downstream, they create impassible gorges, akin to southern Utah’s famed slot canyons only filled with a torrent of glacially cold water.

Compared to the scale of geologic time, Katmai’s volcanoes forced their way to the surface relatively recently. Over the last several hundred thousand years, upwelling magma buckled and fractured its way through thousands of feet of Jurassic-aged rocks, although these sedimentary layers have deformed little since they were deposited. The rock of “Whiskey Cleaver” a wedge of 150 million year-old marine sediments buttressing the north flank of Mount Katmai, are nearly as level as when they accumulated on the bottom of the seafloor.

The first time I reached the caldera in 2011, I stuck to the base of the cleaver, following the margin of the glacier to the west while hugging the exposed rock and glacial till until I needed to step onto the glacier leading to the caldera rim. This time while looking to avoid glacial travel as much as possible—dying alone, trapped in a crevasse seems like a horrible way to go—I chose a slightly more direct route up a steep ash and snow-covered slope slightly east of the main glacier. The sun had yet to soften the frozen snow as I ascended. I couldn’t kick sufficient steps into the crust, which forced me to avoid the steepest snowfields where I felt the risk of falling was too great. This turned into the diciest part of the route and was the one place that I wished I carried an ice axe.

At the top of this slope, I reached a bench where the gradient lessened in steepness, kept me temporarily off the glacier, and away from areas prone to rock fall. From here, it was a simple task of avoiding the steep sidewalls prone to sodden late spring avalanches and the center of the glacier where crevasses are more likely to open in June. Not a single cloud hung in the sky, the air was dead calm, and the caldera was only two miles away. 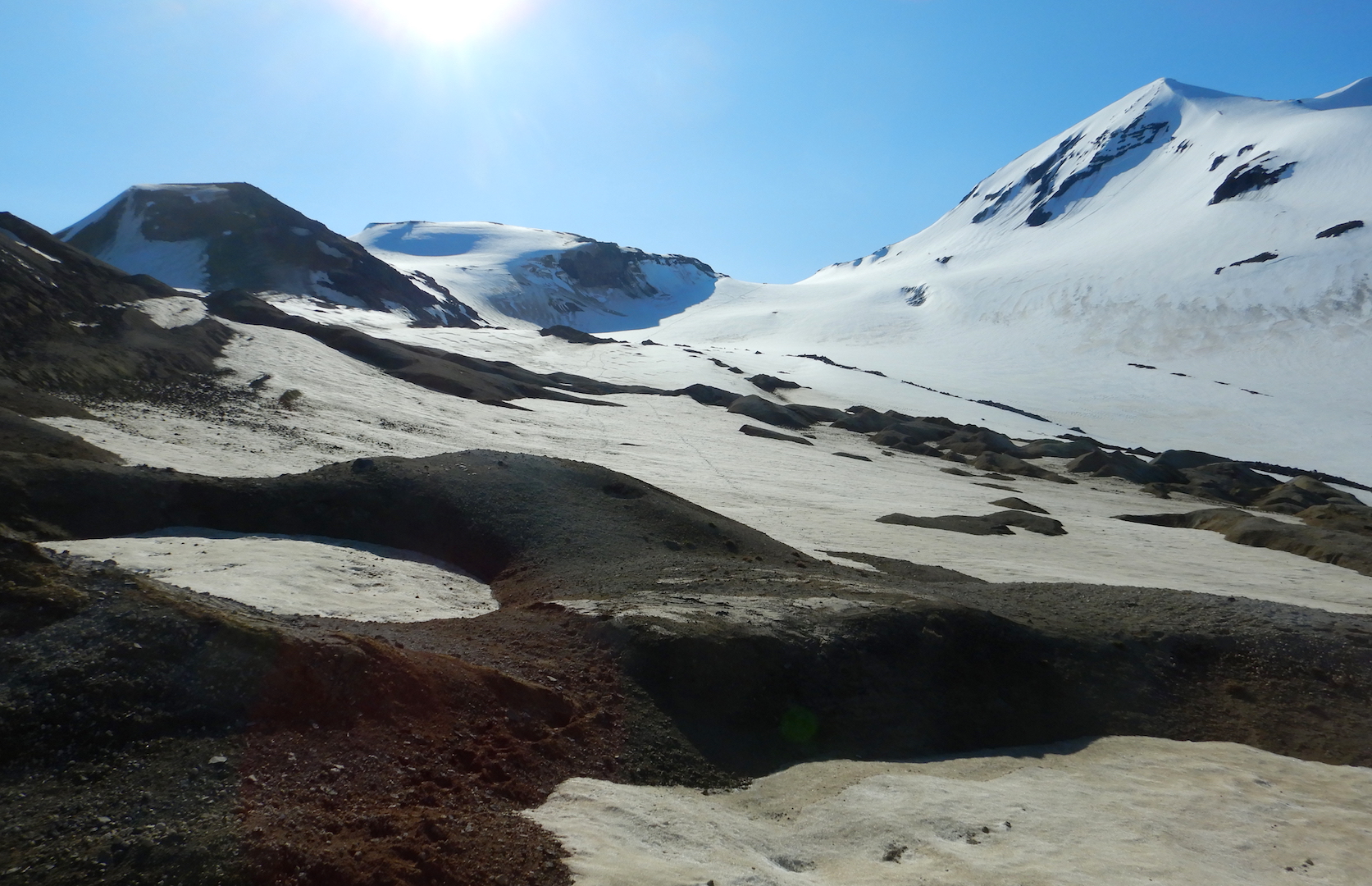 The final two miles leading to the caldera

When the 1912 eruption began, Mount Katmai was a triple-peaked and glacially clad 7,600-foot tall volcano. Around midnight on June 7, 1912—in the midst of eruption’s most violent outbursts—Mount Katmai began to collapse. Over the next twenty-four hours, the summit fell inward, generating fourteen earthquakes between magnitudes 6 and 7.

No one witnessed the collapse. Thick ash replaced daylight with an inky blackness across the region. Not until the eruption ceased and skies cleared on June 9 could anyone see that the mountain had lost its top. Because Mount Katmai collapsed, for decades people considered it to be the source of the eruption. In a sense it is, but not from the perspective of explosiveness. Careful study of the eruption’s fallout and pyroclastic flow deposits in the Valley of Ten Thousand Smokes revealed relatively little originated from Mount Katmai. Instead, the vent that opened at Novarupta siphoned away its magma. Perhaps not coincidentally, the elevation of the caldera floor and Novarupta are nearly the same.

Human eyes would not look into the caldera until Robert Griggs and his expedition team slogged their way to the rim from the Pacific coast in 1916. While I enjoyed the advantage of ascending on clear snow with stable footing along with the fore-knowledge of how to get to the rim, Griggs clawed up the volcano’s still muddied and pumice-covered southern slopes, all-the-while pioneering his route, not quite knowing what he’d see or what challenges he’d face until he got there.

When Griggs reached the unstable and knife-edge caldera rim caldera, he found glaciers cleaved flush with the precipitous walls where several thousand feet of mountain once stood. Peering into the gaping earth, Griggs had difficulty comprehending the caldera’s scale, and he stared amazed at a horseshoe-shaped island of lava in a milky, robin-egg-blue lake deep within the bowels of the volcano.

From the sight lines along my route, the terrain provides no hint the caldera exists. Although the route’s gradient lessened the closer I got to the rim, the caldera appeared in sudden and spectacular fashion.

During a 2011 ascent here, I was forced to retreat within 15 minutes by howling winds, a cloud ceiling which allowed on the scantest of peeks into the bowl, and the threat of snow. On this day though, I sat on the rim for more than two hours, attempting to embed the scene into memory. I couldn’t help but consider how ephemeral it was. The shallow lake first witnessed by Griggs has grown more than 800 feet deep and continues to rise. New glaciers hug the interior walls and calve small icebergs into the water. I watched avalanches of rock and snow tumble more than a thousand feet from the rim to the lake. Water discharged from hydrothermal vents at the bottom of the lake creates greenish-brown swirls with the deep blue of the lake’s surface.

Like the dozen-plus other volcanoes in Katmai, the mountain will churn with unrest again. Its next eruption is unlikely to be as large and landscape changing as the 1912 event, but Mount Katmai’s potential to unleash the power of the Earth remains ever-present. As I sat on the rim, looking at the hole where a several thousand feet of rock once stood, I enjoyed the long moments of calm, wonderfully alone with a mountain only temporarily at rest.

To learn more about the Valley of Ten Thousand Smokes, read Robert Grigg’s 1922 book about its discovery and exploration. Volcanologists Wes Hildreth and Judy Fierstein authored the authoritative text on the eruption’s geology in The Novarupta-Katmai Eruption of 1912—Largest Eruption Eruption of the 20th Century Centennial Perspectives. Lastly, I devote two chapters in my forthcoming book, The Bears of Brooks Falls: Life and Survival on Alaska’s Brooks River, on the 1912 Novarupta-Katmai eruption’s significance to the region and the creation of Katmai National Park. Look for The Bears of Brooks Falls late this year via Countryman Press.