Due to strong winds, I was unable to reach Brooks Camp on time. The next morning, as instructed by Katmai Air, I arrived at their dock before 7 a.m. I was eager to get on the “first load.” Evidently everyone who didn’t reach Brooks Camp the previous day was told they’d be on the “first load,” which caused Katmai Air to deal with some cranky customers. (Not me, I might add, but I understood others’ frustration.) 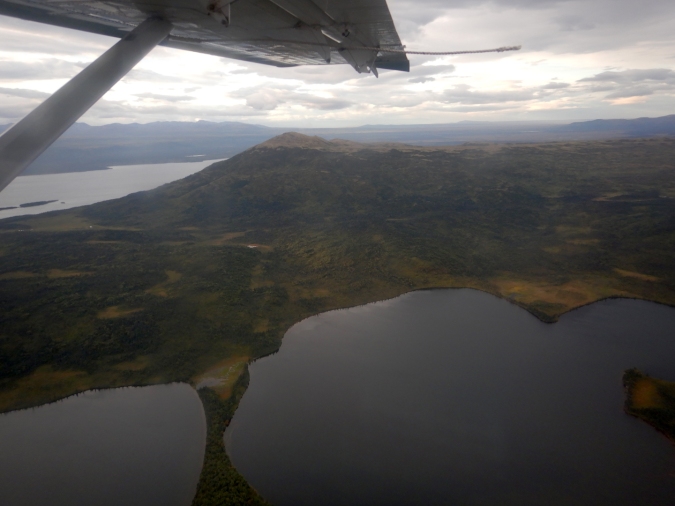 Looking southwest toward Mount Brooks from the air.

Around 8:40 a.m., I arrived at Brooks Camp—or Lake Brooks to be exact. Winds out of the east were still too strong for planes to land on Naknek Lake, but I didn’t mind the view of Dumpling Mountain and the head of Brooks River.

Dumpling Mountain and the outlet of Lake Brooks

Yes, even former rangers are required to attend the bear safety talk upon arrival at Brooks Camp.

…I hurriedly pitched my tent in the campground….

My tent in the far southwest corner of the campground, as far away from other people as I could get.

…and walked back to the lower river to binge watch bears. 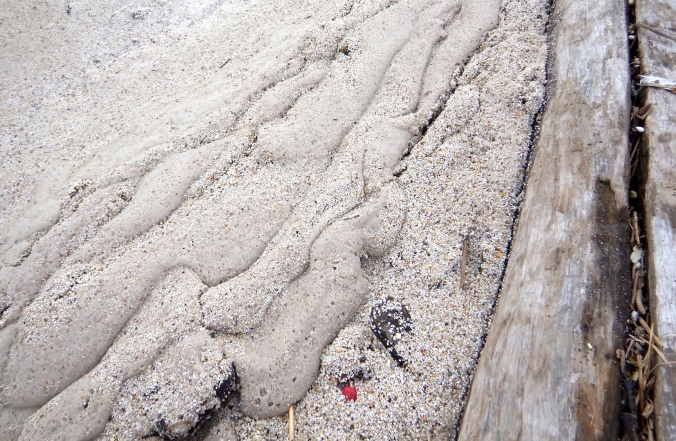 Fine pumice sand, evidence of the powerful winds from the previous day’s storm, was all over the beach.

In September, the wildlife-viewing platform near the mouth of Brooks River is my favorite place to be. Upstream, just where the river enters my line of sight from the platform, thousands of salmon work to complete their life cycle. As the fish weaken and die, the river’s current sweeps them downstream. Where the river’s current is not longer strong enough to carry them further, it drops the barely live and dead fish, making the river mouth and meanders just upstream the most productive salmon scavenging areas at Brooks.

When I arrive on the platform four subadult bears play and fish, while 409 Beadnose and cubs lounge nearby. After another large salmon run, the bears at Brooks River are well fed, and perhaps as a result the younger bears were especially playful.

One light brown subadult bear out of this bunch very much resembles 273’s yearling in 2016. This bear appears to be a young subadult, but is large for a 2.5 year-old.

Around noon, after Beadnose and cubs settled into a nap below the platform, I decided to visit Brooks Falls, where bears had been fishing in higher than average numbers for this time of year. I had a hypothesis as to why, but I needed at least a few cursory observations to support it.

Over my short stay, the vast majority of fish I saw bears catch at the falls were silver (coho) salmon. This run begins in August and often continues through September. Larger on average than sockeye, a single, fresh silver salmon can provide several thousand calories for bears skilled enough to catch them. Like the beginning of the sockeye run in late June and July, the late run of silver salmon is most accessible to bears at Brooks Falls.

But bears in the lower river make huge energy profits as well. In the early evening, after skipping a true lunch to eat an early dinner (to maximize bear watching time), I return to the lower river until sunset. 410 and 409 Beadnose both patrol the river slowly, snorkeling for any salmon that can swim away. In a half hour, 410 eats four fish. Over an hour, Beadnose leisurely consumes eight. These are relatively low catch rates for this section of river, yet even assuming the salmon carcasses provide less than half the energy they did in July (spawned out fish may contain 2000-2500 calories or less compared to the 4500 calories when the first arrived) 410 and 409 still ate at least 8,000 and 16,000 calories respectively. In past years, when 410 has remained within my line of sight longer at the lower river, I’ve counted her eating 41 fish in 3 hours 25 minutes. Even if she only ate part of each fish, when your profit is measured in calories needed to survive winter hibernation, this isn’t a bad day’s work.

As the sun begins to set behind the western toe of Dumpling Mountain, I relaxed to watch bears come and go from the river—128 Grazer, 409 Beadnose, 284, 410, 708, 610, four unidentified subadults, 879, 474, and many cubs. If the sun didn’t set so soon and I didn’t risk running a gauntlet of bears in the dark to get to the campground, I would’ve remained out for much longer. Responsible bear watching, however, includes not wandering around in the dark, so I retire to the campground eager for sunrise and another day on the river.

19 thoughts on “My Trip to Brooks Camp: Day Two”