It was late January, but I enjoyed nearly perfect hiking weather in Big Bend National Park. The sky was clear, the wind was calm, and the temperatures hovered in the hiking Goldilocks range (for me, that’s the low 60˚s F). I had spotted a few piles of bear scat earlier that day, but all were dry and desiccated. Then in the late afternoon, I found one particularly fresh pile of crap.

This scat was soft and pliable and hadn’t been exposed to the dry desert air for very long. (I poked it with a stick to gain a very scientific measure of its age.) Was there a bear nearby? I hoped to find out.

The previous day, I stopped in the Chisos Basin Visitor Center to purchase a book to help me search for the park’s endemic oaks. A map on the visitor center wall was marked with sticky notes identifying when and where people had spotted black bears. At least a dozen had been seen over the past two weeks. I made a mental note to watch carefully for bear sign. Maybe, just maybe, I would be lucky enough to see one for myself.

Although I spent considerable time searching for the endemic oaks (and found at least a couple, plus some species rarely found in the U.S.), bears were never far from my mind. Backcountry campsites all had bear-resistant food storage boxes, and signs clearly informed people that bears will take your unattended pack.

No long after I photographed the marking tree, I stumbled on the aforementioned scat. Its freshness caught my attention, but it wasn’t steaming so I couldn’t be sure if a bear was close or not. I only knew it was there earlier in the day. As I proceeded up the trail, motivated to pick up my pace and return to the campground before dark, two hikers traveling in the opposite direction told me they had just seen a bear not far from the trail. This was their first wild black bear sighting, and they spoke excitedly about their experience. I thanked them for the info and continued on, now even more alert.

The hikers said the bear was near a switchback in the trail, not far from a backcountry campsite. I slowed my pace as I approached that location, not wanting to startle the animal. A moment later, through some thick vegetation, I heard cracking branches and there it was—a black bear. 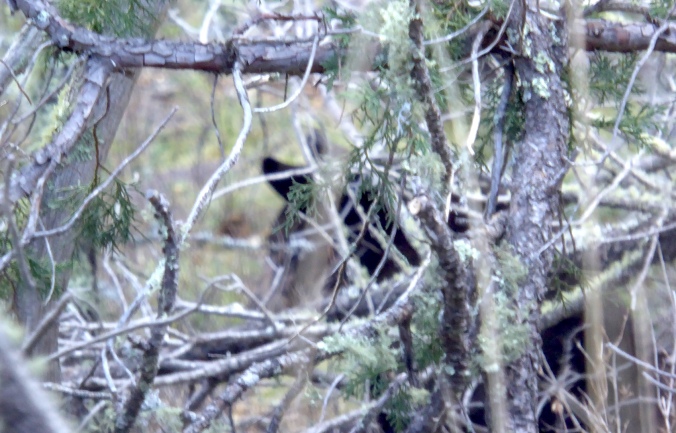 What would a bear be doing out in January? Since bears are omnivorous and eat a wide variety of food, their scat reveals a world of information about where they’ve been and what they’ve been up to. The fresh bear scat I found 10 minutes before, like the older scat on the trails, was filled with fragments of pinyon nuts and shells. Pine nuts are exceptionally nutritious, containing almost 700 calories per 100 grams. The pinyons pines in the Chisos Mountains seemed to have produced a sizable cone crop in 2016, one which helped sustain the bears into mid winter.

The density of the shrubs made it difficult for me to se exactly what the actual bear was doing, but it appeared to have its nose to the ground and it wasn’t moving far. Perhaps it was still feeding on pine nuts. 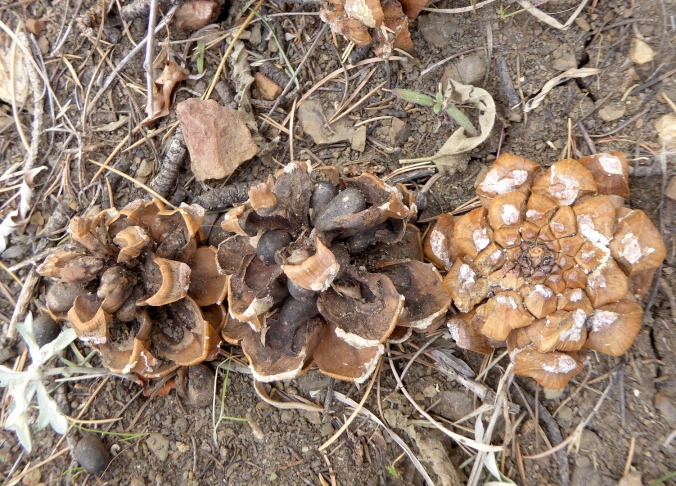 Black bears in the Chisos Mountains rely heavily on habitats with pinyon, oak, juniper, and grassy talus slopes, although male bears will make more frequent use of low elevation areas. Even so, this was January 26. Shouldn’t the bear be inside a den?

Black bears in more northernly locations hibernate well before January. However, bears in Big Bend don’t typically enter their dens until late January or February, and when they do many don’t seem to fully enter hibernation. Male bears, especially, are more likely to remain active. Pregnant females in Big Bend, like other bear populations in North America, have the longest average denning period, beginning in mid to late December and ending in late April.

This winter activity isn’t unique to Big Bend’s bears. Black bears in Florida have similar winter dormancy patterns. Mild weather and the prospect of food, especially, can keep bears active for longer time spans. After all, bears are avoiding winter famine more than winter weather when they hibernate. The bear I saw probably wasn’t doing anything abnormal for a Big Bend black bear. It was just another bear doing bear things like eating and shitting in the woods.

5 thoughts on “A January Bear”