Along the Atlantic Ocean and Gulf of Mexico, from Newfoundland to Florida, you can find a special habitat—the Spartina salt marsh. A transition zone between the land and the sea, this is a challenging place to live for many organisms. I found myself with some spare time while visiting family in South Carolina, so of course I couldn’t resist exploring a nearby salt marsh, one of the most productive ecosystems on Earth. This habitat produces more biomass per meter than almost any other biome. Only tropical rainforests are more productive.

I reached the marsh near low tide, which exposed soggy ditches and mud flats. The mud was soupy in places, sucking at my boots.

Oysters clung together in the lowest reaches of the tidal flats and ditches. The tips of their shells may be fragile, but they are also extremely sharp, as sharp as a surgeon’s scalpel. I don’t know whether the shell’s sharpness is an accident of evolution or an adaptation to protect them from predators like drums, rays, and clumsy humans like me. I do know that I’ll never forget the first time I tried to walk over a few oysters while only wearing flip flops. Trust me, it’s not a pleasant experience. 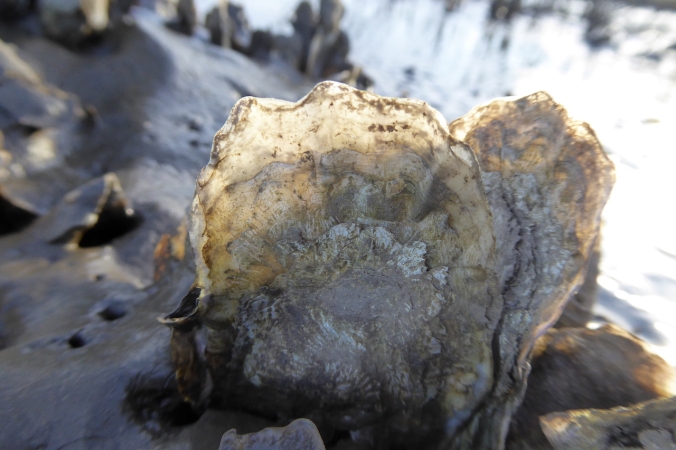 The edges of many oyster shells are thin and fragile, but also very sharp.

Walking was easier where vegetation was firmly established. On the U.S. Atlantic coast, most salt marshes are dominated by Spartina grasses. There are several species of Spartina, but the most abundant is salt marsh cordgrass (Spartina alterniflora). Cordgrass thrives in this habitat, despite the harsh conditions—flooded twice-daily by tides, exposed to high salinity, and mired in anoxic (oxygen-free or oxygen-limited) mud.

Salt marsh cordgrass is the most abundant and ecologically important plant in East Coast salt marshes.

Most flowering plants have a fairly low tolerance for salt, but the cordgrass is watered by the ocean twice a day. Cordgrass meets the salty challenge by sequestering salt in its shoots and excreting the salt through glands in its leaves. The grass deals with the challenge of low oxygen levels in the deep mud by exchanging gases from roots in the upper few centimeters of mud to those underneath. Few plants have these dual abilities, which is the reason cord grass so thoroughly dominates salt marshes. Once you learn to identify salt marsh cordgrass, you can easily and accurately judge the average level of high tide, since cordgrass is usually limited to areas that receive substantial flooding with each high tide.

The transition between the low marsh to the high marsh is marked by plants other than salt marsh cordgrass. The high marsh lies above the typical high tide line. Plants like black needlerush (Juncus roemerianus), salt meadow hay (Spartina patens), salt grass (Distichlis sp.), and saltwort (Salicornia sp.) begin to compete with cord grass where tidal flooding is less frequent. Needlerush is the taller plant on the left of the photo.

Saltwort is a noticeable member of the mid to high marsh community.

Unlike salt marsh cord grass, saltwort tolerates high salt levels through its ability to retain water in its stems, but it cannot withstand the same level of submersion that cordgrass can. Saltwort always captures my attention though, not only because it is a pretty plant, but because it is tasty. Late December is not a choice time for nibbling on saltwort stems. Few were even standing, but the sight of them reminded me of their pleasing salty bite. (I’ve also pickled saltwort using a recipe I found in a Euell Gibbons book. It tasted surprisingly good.)

Before leaving the marsh, I took some time to watch birds out on the lower fringes of the exposed mud. A casual scan through binoculars revealed over a hundred semipalmated plovers. On the edge of the marsh, these birds work to survive the winter before returning north to their breeding grounds from Newfoundland and Labrador west to Alaska.They were also finding a few more invertebrates than I was. 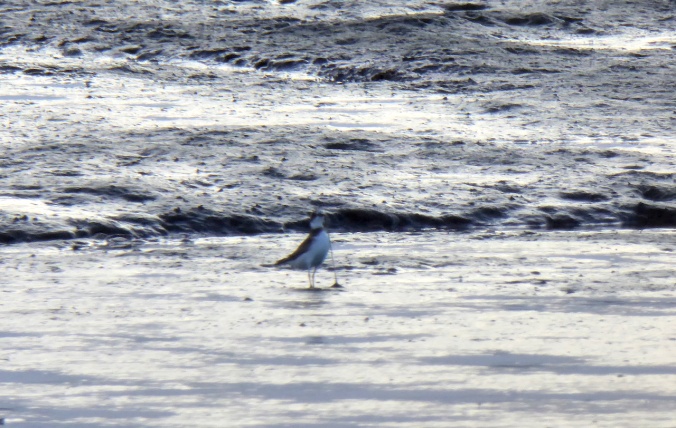 Worms are yummy for plovers.

My urge to get a little closer to the exposed mudflats brought me to the edge of the cord grass where the mud was very soft. While plovers were pulling invertebrates out of the mud, I was having some difficultly extracting my boots from the mud. Salt marshes are challenging places to live and, if you’re human, difficult places to travel.

4 thoughts on “In the Salt Marsh”