Wilderness, as defined by the 1964 Wilderness Act, is “an area where the earth and its community of life are untrammeled by man, where man himself is a visitor who does not remain.” Importantly, the Wilderness Act states wilderness areas also preserve “wilderness character,” a set of values that link wilderness conditions with legislative intent. Federal land management agencies must manage wilderness so it maintains all aspects of wilderness character. Wilderness must remain untrammeled, natural, undeveloped, provide opportunities for solitude or primitive and unconfined recreation, and protect other features of value. 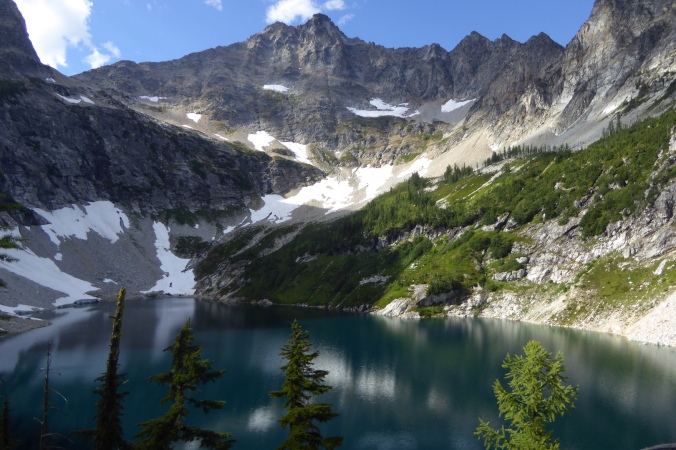 Any ecosystem manipulation in designated wilderness will affect some of these values, especially during the effort to restore grizzlies. Specifically, the Draft Grizzly Bear Restoration Plan will temporarily trammel the land by manipulating a species’ population. Additionally, helicopters flights can impact opportunities for solitude, and tracking collars on bears will affect the wilderness’s naturalness and undeveloped characteristics. For these reasons, Wilderness Watch advocates for a natural recovery alternative, which would allow bears to return on their own and offer the greatest adherence to wilderness character and values. They state:

However, some of these assertions are incorrect. There is a “natural recovery alternative” in the draft restoration plan. It’s the no action alternative, or Alternative A. This alternative may need further revision to achieve Wilderness Watch’s goals, but it hasn’t been rejected for further analysis or excluded. Perhaps most importantly, if Wilderness Watch’s position is adopted by the National Park Service and U.S. Fish and Wildlife Service, it will likely lead to the extirpation of grizzlies in the ecosystem, where only six bears are thought to remain (Draft Grizzly Bear Restoration Plan, p. 90).

Grizzly bears are not doing well in southwestern British Columbia. Adjacent populations to the north are only slightly more numerous. Fewer than 30 grizzlies are estimated to live within the Stein-Nahatlatch and Garibaldi-Pitt areas (interactive map of grizzly populations in British Columbia). Under current conditions, no grizzly population in Canada or the U.S. is likely to expand and occupy the North Cascades region (Draft Grizzly Bear Restoration Plan, p. 88-89). 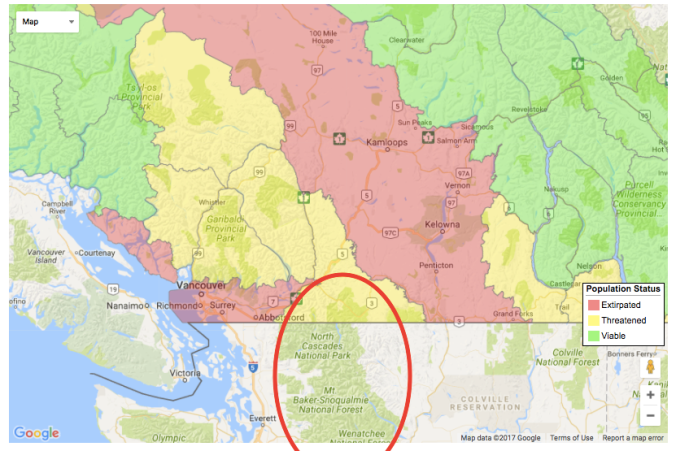 This map shows the current status of grizzly bear populations in British Columbia. Many areas of B.C. have healthy populations of grizzlies, but every population in southwest B.C. is either threatened or already extirpated. Red Circle is approximate area of North Cascades ecosystem.

Wilderness Watch is correct when they write, “None of the current action alternatives, involving translocating bears, are compatible with Wilderness.” In this case, helicopters and intensive management of translocated bears would impact the area’s wilderness character. The impacts may be unavoidable, but under certain conditions wilderness character can be manipulated for safety and management needs (i.e. invasive species removal). The NPS and USFWS would need to diligently consider ways to minimize impacts.

Anyone who is willing to share the ecosystem with bears and also wishes to preserve wilderness character should support Alternative B in the draft restoration plan, which proposes to introduce a small number of grizzly bears into the area, monitor them, then reevaluate whether more bears should be introduced. This offers the best compromise, in my opinion, between the no action (natural restoration) alternative and other options (alternatives C and D) that are much more heavy handed.

Wilderness and wilderness character is worth protecting. Groups like Wilderness Watch should continue to be a watchdog for designated wilderness. Yet, the effort to restore a healthy, self-sustaining population of grizzlies in North Cascades transcends arbitrary wilderness values. Bears need wild areas more than people.

I wish we could step back and let grizzly bears restore themselves. Nothing I’ve read indicates that’s a successful solution though. The North Cascades ecosystem was identified as one of six recovery zones for grizzlies in the Lower 48 partly because of its large, natural, and healthy wilderness areas. Bears can survive here, if we give them a push. I believe we can sacrifice a bit of our cultural need for an idealized, untrammeled wilderness to benefit grizzly bears. If we don’t act, if we allow grizzlies to disappear, then that would be one of the greatest trammels of all.

You can submit comments on the Draft Grizzly Bear Restoration Plan through April 28, 2017.

7 thoughts on “Restoring Grizzlies is not a Threat to Wilderness”