Tucked away in a section of Four Holes Swamp, a tributary of the Edisto River in South Carolina, lies a pocket of remarkable forest. Currently owned and managed by the National Audubon Society, Francis Beilder Forest protects the largest virgin bald cypress and tupelo swamp remaining in North America. 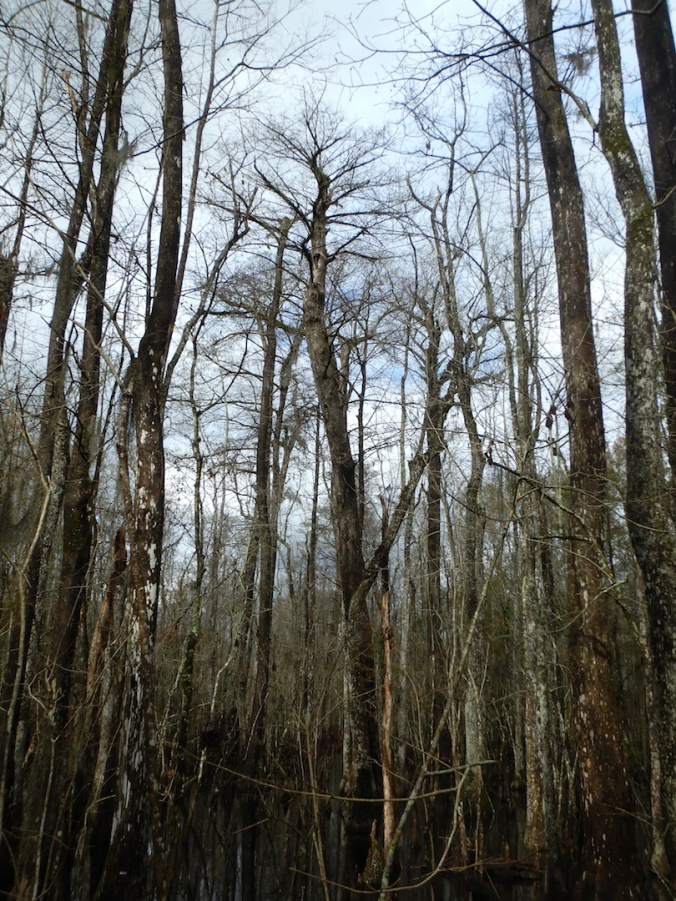 Bald cypress (Taxodium distichum) is a deciduous member of the cypress family (Cupressaceae), which includes juniper, white-cedar, arborvitae, incense-cedar, Sequoia, and redwood. Like hickory trees, however, bald cypress shed their pinnate leaves each fall and grow new leaves in the spring. This characteristic inspired their common name since the trees are “bald” for at least part of the year. The species is long-lived and its wood is rot resistant. Recently, cypress logs dating back 25,000 to 50,000 years have been uncovered from sand quarries along the Pee–Dee River.

Visiting the Beilder forest is easy, requiring only the ability to traverse a level, 1.75 mile-long boardwalk. Walking into the forest, I could immediately see this was a special place.

Bald cypress swamps experience seasonal flooding, and when I visited in mid December the forest was covered in a blanket of tea-colored water stained brown by tannins. The day was relatively warm and temperatures reached above 60˚ F. A few turtles and snakes took the opportunity to climb out of the water and sun themselves on fallen logs. My attention, however, was consistently drawn to the canopy and the craggy tops of centuries- and millennium-old bald cypress trees. 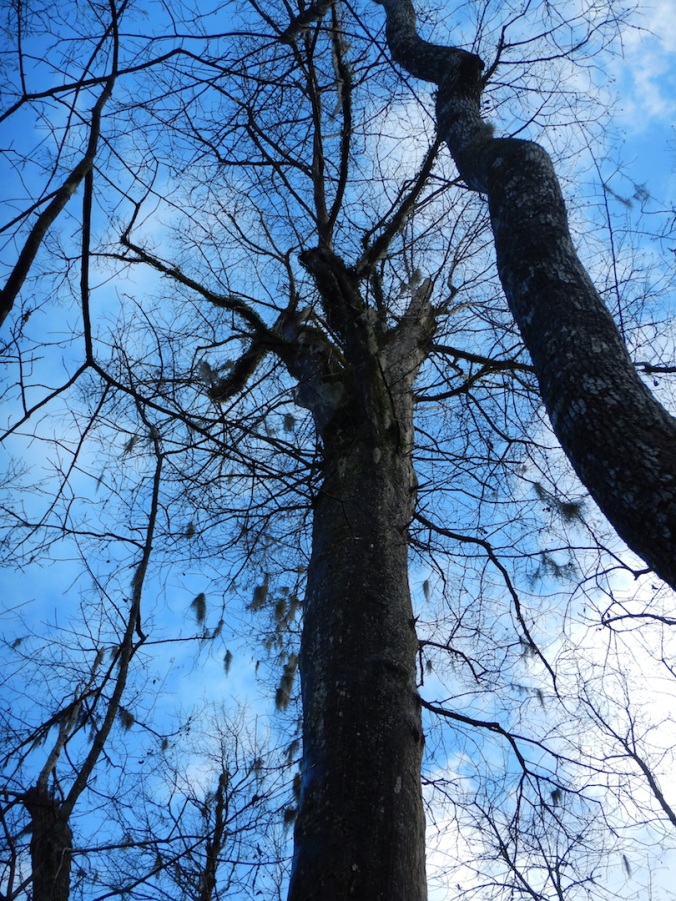 Bald cypress is one of the longest-lived trees in North America and the longest-lived tree in the eastern U.S. The oldest known tree at Beilder is nearly 1,600 years old. Along the boardwalk, you can find a 1,000-year giant, which outwardly looks healthy enough to stand another thousand years. (I asked the Audubon staff if I could see the 1,600 year-old tree and to my delight it could be found along the boardwalk. But, I won’t disclose its exact location since the staff would like to avoid making it a target for vandals.)

A thousand year-old giant in Francis Beilder Forest. This tree grows adjacent to the boardwalk and is identified by a sign.

At Beilder, many trees are massively trunked, resembling the silhouette of giant sequoia. Above their basal swell, they barely seem to taper until their branches splay outward in the canopy.

When you live to be over 1,000 years old you’re bound to acquire a scar or two. Reaching over 100 feet high, each bald cypress carries a legacy of the battles with insects, fire, and severe weather like thunderstorms, tornados, and hurricanes. 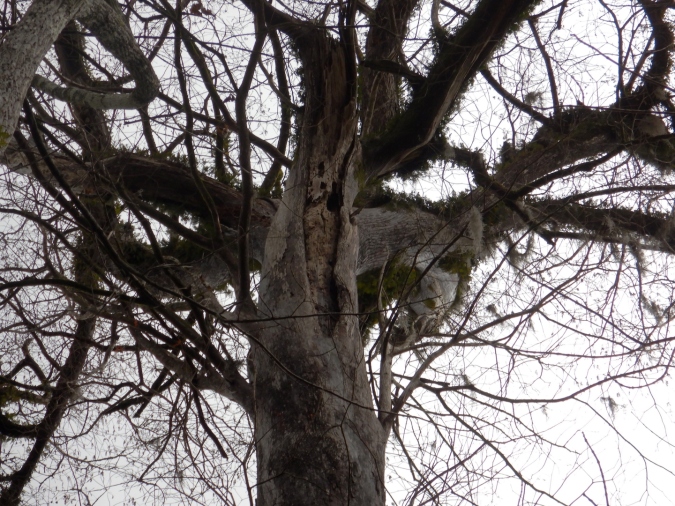 Some time ago, a large branch broke off of this tree, perhaps allowing carpenter ants an easy means of entry. Larger holes in the same branch are the work of large woodpeckers like pileated woodpeckers. One hundred and fifty years ago, ivory-billed woodpeckers would’ve inhabited this place too. Could some of these woodpecker holes be from this extinct bird?

The charcoaled interior of this large bald cypress preserves a moment in time when it was struck by lightning and burned.

Collectively and individually, these trees tell a fascinating story, if we are willing to listen. Maybe the most poignant of those, from my perspective, is loss.

I marveled at the trees at Francis Beidler, but I marveled at a fragment. Their longevity and physical proportions might only be remarkable because we’ve eradicated nearly all other bald cypress of the same size and age. Francis Beidler Forest is one of the few places where old-growth bald cypress trees still exist. According to one estimate, over 42 million acres of bald cypress forests once covered the southeastern United States, an area nearly the size of Missouri. Now, only 10,000 acres remain, equivalent to .02% of the original bald cypress forest! The rest was logged for lumber, furniture, and shingles with no forethought for future generations who may find great value (monetary or otherwise) in healthy ecosystems or for the species who depended on this habitat.

Through uncontrolled hunting and the loss of old-growth forests like bald cypress swamps, we drove the Carolina parakeet and ivory-billed woodpecker to extinction. Knowing what we consumed in the past, understanding that we continue to cause extinctions and change the climate today, can we ethically expand our footprint on Earth? How much extinction does it take before we say enough is enough?

The trees at Beilder felt the pounding of the ivory-bill and heard the calls of parakeets. Perhaps they were even enveloped by passenger pigeons, a species once so abundant in North America that their flocks extended for miles and blackened the skies. The air in this forest used to ring with the echoes of these birds. When we lose forests, we lose much more than trees.