There’s a place along the Skagit River where I like to wander. Upstream and downstream, the river is lined with rural home sites, but in between there’s a small pocket of undeveloped land where relatively few people go. Compared to the wild lands surrounding nearby Mount Baker and the North Cascades, it’s a small area and nothing close to what most people would consider wilderness. A regenerating clear cut sits on a terrace above the water. Below it, the river flows through a shallow S-curve and a swampy area occupies the annual floodplain. Filled with a willow thicket, it’s a good place to hide, for me as well as many other animals.

I’ve made it a habit to explore the animal trails leading in, out, and through the floodplain. In the spring, when the water table is higher, Pacific tree frogs spawn in ephemeral pools. In fall, a black bear visits the riverbank to scavenge spawned-out salmon. All year, elk use it to move between pasture. I frequently see sign left by coyotes, and if I look hard enough I might be able to find the tracks and scat of bobcats. While I rarely see the live animals, exploring their haunts helps keep me connected to the other creatures that I share this place with. I have a spot within this area where I like to sit and listen, but sometimes the most interesting observations happen upon my approach and exit into this little pocket of wilder land.

Following an elk-maintained path down to the riverbank, I exited the forest onto a muddy side-channel, now mostly dry after a long, arid summer. The exposed mud and sand of late summer offer some of the best tracking opportunities of the year. I slowed my pace, eager to see which animals had moved through the area recently. In the semi-firm mud, I stumbled upon a set of feline tracks. The tracks were large, as wide as the palm of my hand with four clear toe prints. There were no claw marks and the sizable metacarpal pads were distinctively three-lobed at the base. These belonged to a mountain lion. 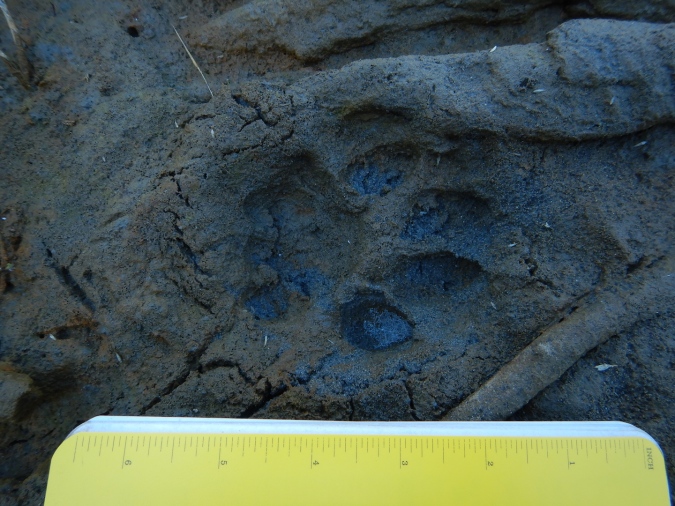 Curious to know more about its travels here, I followed the tracks along the edge of the river. The cougar followed the same general path I would have to move upstream; it stuck to the mud and driftwood on the edge of the willows. From the additional tracks I was able to find, the cougar continued along the riverbank for another hundred yards before I lost the trail in the adjacent thicket.

Based on my completely unscientific survey of mammal sign in the surrounding few acres, elk seemed to be the most abundant large animal here. They left many sets of tracks that moved perpendicularly from the river and into the deep cover provided by the willows. Was the lion stalking potential prey, or was it simply wandering through? Could a kill site be nearby? My imagination ran with the possibilities, but the dense vegetation would effectively hide any further evidence of the lion’s travels—unless I was lucky enough to stumble upon more sign.

Discounting that possibility as too unlikely, I left the river by following a narrow elk trail lined with salmonberry. The trail led, in a convoluted manner, to my sit spot where I sat for while to jot a few written notes and listen to the forest. 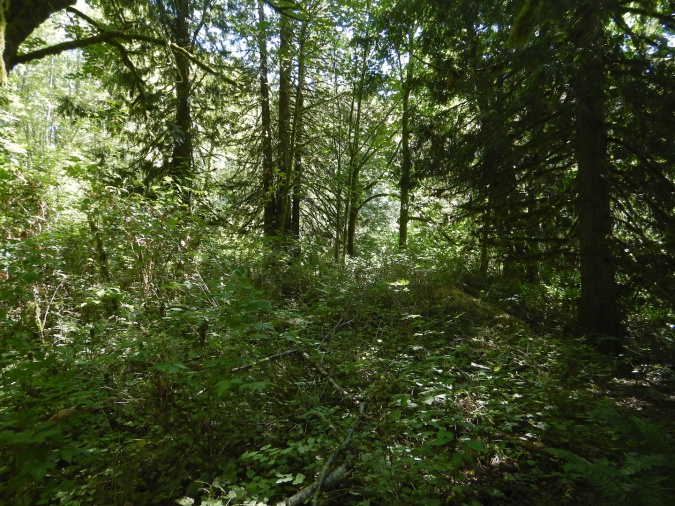 To head home, I took a different yet familiar route along more elk trails. By this time, I wasn’t expecting to find any more sign of cougars (the duff was too well compacted and dry to hold their paw prints), but when I reached a fork in the trail I found evidence that at least one cougar had visited the area several times. Under low hanging branches of western red-cedar were four large scrapes. Each scrape was oblong and about a foot in length. Each had a small pile of debris at the base and three were accompanied by scat.

Mountain lions are reported to urinate when they make scrapes, but I couldn’t detect any strong urine odor despite kneeling down for a better waft. Evidently, the cougar had been here several times, but not that day and perhaps not even the past week. It looked to be eating well when it was here though. One pile of scat was sizable and reflective of a diet heavy with meat.

I found no other mountain lion sign that day, but the scrapes and tracks caused my mind to again race with the possibilities of its life here. Did it make a kill nearby? Or, was it merely using the heavy cover as a secure place to rest between meals? I left with more questions than answers. This mountain lion’s story might be missing some pages, but sometimes the finer details of a good tale are best left to the imagination.

2 thoughts on “A Mountain Lion Prowls the Neighborhood”