Plans are afoot to restore grizzly bears to the North Cascades ecosystem. The draft plan includes four alternatives. Only one (Alternative A) takes no action. The others, through various strategies, all aim to restore a self sustaining population of bears in the ecosystem, an effort I support. Grizzlies should be in North Cascades, but that can’t be the end game. We need to go further to allow wildlife to go father.

The story of the grizzly bear is well documented. Like bison, grizzlies suffered immensely from westward American expansion. Once found from California to Missouri and Alaska to Mexico, this iconic species is now restricted to Alaska, western Canada, and a few isolated pockets in the Lower 48.

The grizzly bear was listed as a threatened species in the Lower 48 under the Endangered Species Act in 1975. At the time, grizzlies were known or thought to exist in only four states. Since then, its range has not expanded substantially, but the most famous grizzly population in Yellowstone National Park has grown to over 700 individuals, at or near the Yellowstone ecosystem’s carrying capacity, and the Northern Continental Divide population, centered around Glacier National Park in Montana, is also doing well with over 1000 animals.

Elsewhere in the Lower 48, grizzly bears remain rare or non-existent. The Selkirk ecosystem, in northwest Washington and adjacent British Columbia, harbors only 80 grizzly bears. The Cabinet-Yaak ecosystem in northwest Montana and northern Idaho has about 50. No grizzly bears are known from the Bitterroot ecosystem in central Idaho, nor in the San Juan Mountains of Colorado where they were rumored to exist. They are extinct in Mexico.

Grizzly bears aren’t spreading far and wide, despite a high level of protection since the 1970s. They are slow to reproduce, need isolation from people, and roam over large areas of undeveloped habitat. They maintain a foothold only where they weren’t extirpated and where humans tolerate them.

In 1982, the U.S. Fish and Wildlife Service identified the North Cascades ecosystem as a recovery zone for grizzlies in the Lower 48. The ecosystem includes over six million acres stretching from extreme southwest British Columbia to Cle Elum and the Interstate 90 corridor in Washington. The core of the ecosystem is a 2.6 million acre federal wilderness complex. The wilderness areas encompass most of North Cascades National Park, Lake Chelan National Recreation Area, and a significant portion of the Okanogan-Wenatchee and Mount Baker-Snoqualmie national forests. 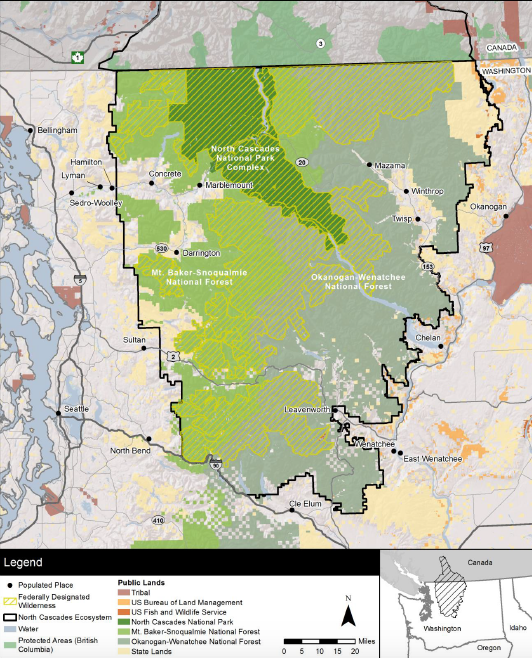 A handful of grizzly bears persist in the British Columbia portion of the ecosystem, but none are known in Washington. The last verified sighting of a grizzly bear in this area of Washington was in 1996. The last time a female with cubs was seen was 1991. (A possible sighting in 2010 was likely a black bear.) According to the restoration plan, it is unlikely that the North Cascades area contains a viable grizzly bear population and grizzlies are at risk of local extinction in this ecosystem if no measures are taken to introduce more bears.

Many places in the North Cascades ecosystem, like the upper Stehekin River valley, provide excellent habitat for grizzly bears.

I believe it is worthwhile to make an effort to prevent the extirpation of grizzlies in the North Cascades ecosystem, even though these bears aren’t keystones like salmon or sea otters. The bears may not create substantial changes in the area, but they will have many effects. Grizzly bears are an umbrella species. If we protect habitat for and maintain healthy populations of grizzly bears, then that large core of habitat is protected for the vast majority of other species in the area.

For grizzly bears and other large carnivores, like wolves, to regain their full potential as umbrella species, we need to do more than tolerate their existence in a few isolated areas. This is where the Draft Grizzly Bear Restoration Plan falls short. The plan aims to restore a population, not create connectivity with others. For grizzly bears to remain truly viable and self sustaining, their populations need connectivity.

The Yellowstone to Yukon Conservation Initiative is probably the most famous example of this concept. It’s an effort to protect a corridor of habitat from Yellowstone National Park north through the Rocky Mountains into the Yukon Territory. It would not only provide habitat for bears, but wolves, wolverines, elk, deer, moose, and many, many other animals and plants. It would provide animals with habitat corridors so they could migrate and shift their range as conditions dictate.

Perhaps we need to provide animals and plants on the west coast of North America with a similar corridor, one stretching from Alaska and British Columbia to Baja California. The current hodgepodge of national forests and parks along the Cascade Mountains and Sierra Nevada could provide the core. To achieve continuity between ecosystems, it would only be a (not so) simple matter of connecting those pieces together in ways to adhere habitats. (I also dream about similar conservation corridors across North America—the Appalachians, a bison commons on the high plains, and Florida among others.)

I’m not sure I will include a vision for the British Columbia to Baja corridor in any comments I might submit on the draft grizzly bear restoration plan. I already know the response: “This is outside the scope of the restoration plan.” The response is completely legit. The lead agencies for the restoration plan, the National Park Service and U.S. Fish and Wildlife Service, have no authority to create such an entity. It’ll need legislation, funding, time, and the strong support of citizens and non-government organizations to be successful.

When we have an opportunity to rewild a landscape, we should. When we have an opportunity to give a little back to wildlife, we should. But, we can do better than simply restoring grizzlies to the North Cascades. Earth’s systems don’t work in isolation. We know enough now to build resiliency into our efforts to protect wild lands and wildlife. We can provide grizzly bears with the habitat to roam into Oregon, California, and other parts of the West again. We can give the ecosystems more room to be resilient. Our goal shouldn’t be to simply have bears in a few isolated areas, but provide continuous habitat so bears can survive future changes without us. That’s how we know we’ve gone far enough.

You can submit comments on the Draft Grizzly Bear Restoration Plan through April 28, 2017.

11 thoughts on “Go Further So Bears Can Go Farther”