Most mammals aren’t keen to reveal themselves to people, which I understand. I don’t want to be around people much of the time either. Unless I’m very lucky or very observant (sometimes it’s both), I typically don’t see the more elusive animals that inhabit the North Cascades ecosystem. Winter, however, provides an opportunity to see the animals without actually seeing them.

In winter, animal tracks in snow reveal stories I could never read otherwise. Without tracks, I would be oblivious to the presence of most animals, so on every trip outside I look for them. On a recent ski journey, I found some tracks I did not expect to see.

The day was comfortable (35˚F/2˚C) and sunny. The snow was reasonable firm. I parked Large Marge at the end of plowed section of road and skied up valley. Skiing wasn’t fast, but it wasn’t a slog either. With long sleeves, I felt overdressed in bright sun, so I paused frequently to cool down and enjoy the view. 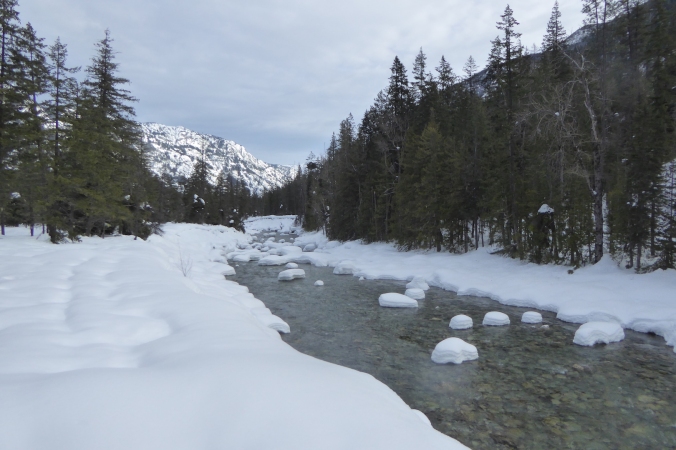 I found High Bridge, which is the boundary between the national recreation area and the national park, buried under several feet of snow. 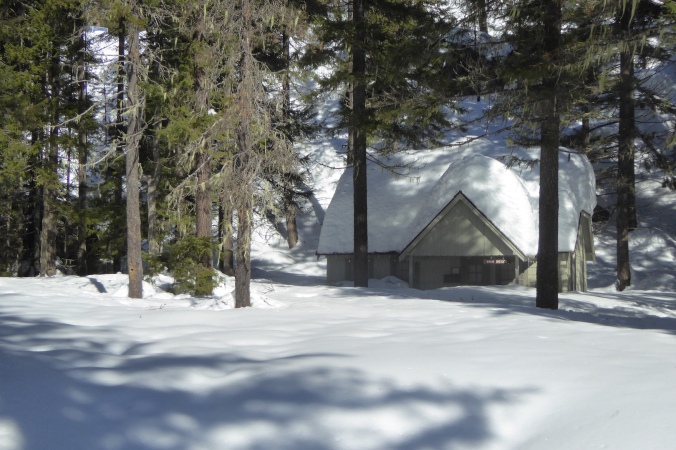 The NPS cabin at High Bridge was mostly buried by snow.

Good thing I didn’t have to use a toilet, because this outhouse at High Bridge wasn’t accessible.

Up to this point, I had seen or heard little evidence of animals. Douglas squirrels were active because I found bracts from Douglas-fir cones scattered under a couple of trees. Red-breasted nuthatches occasionally called from the tree tops (this species is one of the most common in the Stehekin Valley in the winter; at least one of the most vocal.) There was no sign of large or even medium sized mammals.

The snowy road offered a convenient path so I followed it up valley, especially since the avalanche forecast was high and I didn’t want to risk getting caught in any slide. About a mile from High Bridge, I noticed a set of faint, but fairly large tracks in the snow. 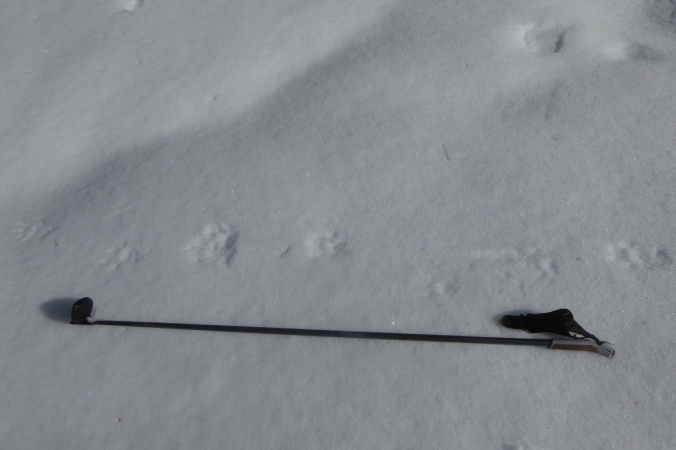 The set of tracks I found. What animal made them?

The tracks were fairly large, although I lacked measuring tape to get accurate measurements. My first thought was “mountain lion,” but then logic started to creep in (thanks Spock). Mountain lions eat many animals, but prey probably isn’t abundant enough in the mid to upper Stehekin River valley at this time of the year to sustain a mountain lion. I saw no deer tracks, even though deer are common in the lower valley now. Other characteristics of the tracks eliminated mountain lion as the source.

This was a wolverine.

This fairly distinct wolverine track clearly shows the animal’s five toes. The basket on the ski pole is 7.5 x 7 cm.

The track pattern indicated it was walking in some places, but loping most of the time.

Wolverine tracks in snow. Each set of three, starting from the bottom, represents a one lope made by the animal.

Wolverines are the largest members of the weasel family and occupy huge home ranges. The tracks were fresh, their crispness suggested they were made early in the morning or overnight. If they had been made the day before, the warm sun would’ve obscured some of their finer details.

What might it eat in this habitat? Perhaps one of the squirrels or hares out and about.

A Douglas squirrel had recently torn apart a Douglas-fir cone on this pile of snow. 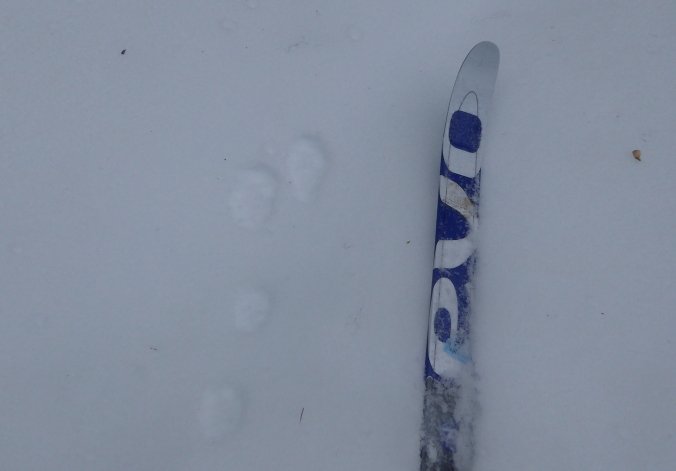 Snowshoe hares were also moving about the forest.

At Tumwater Bridge, the wolverine continued across right next to tracks of a marten, a smaller more arboreal member of the weasel family.

The day was waning at this point, so I turned around and left the wolverine and its tracks behind.

Last year, a large male was trapped and radio collared at Easy Pass by the U.S. Forest Service and Washington Department of Fish and Wildlife. This is almost 20 kilometers due north of the tracks I found. Could it have been the same one?

Maybe, maybe not. Wolverines occupy huge territories and are rare in this area. I was lucky to stumble upon this set of tracks before they disappeared in overnight rain. That day, I was probably the only human in the south unit of North Cascades National Park, but I certainly wasn’t the only mammal prone to wander.

Read more about on the wolverine’s status in Washington.

10 thoughts on “The Other Wanderer”