When I think about how climate change may impact my home and the people and places I care about one example resonates strongly with me.

When I lived in southwest Alaska, I marveled at the return of sockeye salmon each summer. These extraordinary fish endure weeks, even months without food after they reenter freshwater. Instincts and memory drive them upstream to conditions they cannot know until they get there. Finally, they sacrifice their lives to reproduce. Salmon are Katmai’s keystone, yet climate change may threaten these fish that sustain so much of the region’s ecology and economy.

Ocean acidification is a by-product of climate change. Not all the CO2 we pump into the atmosphere stays there. Plants use it during photosynthesis and the oceans absorb it. At first glance, the ocean’s capacity to absorb CO2 seems like a good thing, because less CO2 will be in the atmosphere to trap heat.

In the ocean however, high concentrations of CO2 impact the base of the food web through a process of ocean acidification. H2O plus CO2 forms a weak acid, H2CO3, also known as carbonic acid. In ocean water, carbonic acid makes the water more acidic by releasing a hydrogen ion, which combines with carbonate ions, CO32 to form bicarbonate molecules (read more about the chemistry involved).

Ocean water is normally supersaturated in carbonate, which many species of plankton need to build and maintain their shells. When ocean water becomes more acidic, less carbonate is available for certain algae and animals grow and maintain calcified shells. Calcium minerals used in shell building dissolve in acid, even weak acids like carbonic acid (that’s how most limestone caves are formed), so if you’re a tiny bit of plankton then a small dip in pH can have dramatic affects on your shell.

Plankton are the foundation of marine food webs in many parts of the worlds, including the North Pacific. In one experiment pteropod shells dissolved when placed in sea water with pH and carbonate levels projected for year 2100.  Pteropods are eaten by everything from krill to salmon to whales. If we continue to pump CO2 into the atmosphere at current rates, not only will the climate warm, but the oceans will acidify further. (More info on ocean acidification including a great series of photos demonstrating the effects of carbonic acid on pteropods can be found on NOAA’s ocean acidification page.)

How would a decline in marine plankton affect Katmai’s terrestrial world? Follow the food chain. Ocean acidification impacts the base of the food chain. More acidic oceans can mean less food for salmon. Sockeye salmon primarily eat aquatic invertebrates while they travel the open ocean. When they return to fresh water, salmon feed Katmai’s wolves, bears, trout, char, even plants. Katmai’s world famous bears are adaptable enough to survive dramatic climate shifts, but only if they have adequate habitat to adjust. Adequate habitat means food. Without large runs of salmon, bear densities in Katmai would plummet. The gathering of bears at Brooks Falls will become a memory and Bristol Bay’s economy, based on the salmon fishery and salmon based tourism (sport fishing and wildlife viewing) would collapse.

Salmon are the most important food source for Katmai’s bears.

In a few more years, maybe it’ll be easier to grow tomatoes in Anchorage, but climate change’s worldwide consequences outweigh any potential benefits. Climate change is one of the greatest issues humanity faces, and if left unmitigated it may exacerbate every other environmental issue. Climate change is real and humans are forcing Earth’s climate to warm. That’s not political, it’s scientific fact.

Politics though drives efforts to mitigate climate change. Voters can make an impact this fall. For example, I got Washington’s Voter’s Pamphlet in the mail recently, and discovered Initiative 732 on the ballot. 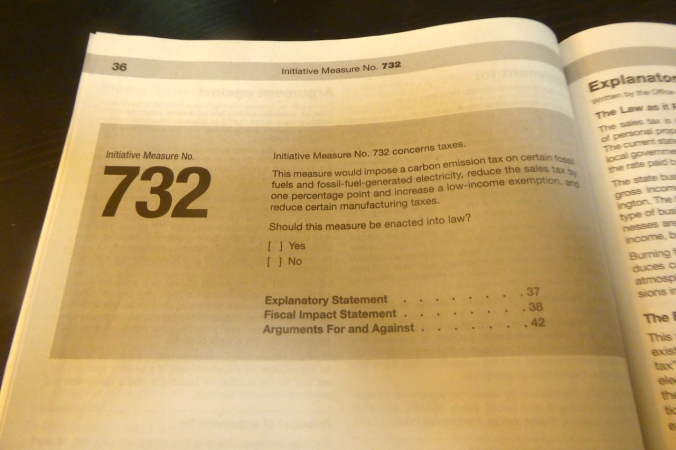 “This measure would impose a carbon emission tax on certain fossil fuels and fossil-fuel-generated electricity, reduce the sales tax one percentage point and increase a low-income exemption, and reduce certain manufacturing taxes.”

This initiative is modeled after British Columbia’s similar carbon tax. Turns out, that the tax was effective without slowing economic growth. However, some environmental groups oppose the initiative. While they may have legitimate concerns, we no longer have time to wait for something better. We’ve waited far too long to address climate change. This situation reminds me of the debate over the 1980 Alaska National Interest Lands Conservation Act (ANILCA), which permanently protect millions of acres of land in Alaska. The final version of ANILCA didn’t give environmental groups everything they wanted, but it gave Americans a whole hell of a lot.

We didn’t have time to waste with ANILCA and we don’t have time to waste on climate change. It’s time for all of us to step up and sacrifice a bit for the future. I’m glad to see to that Washington voters are considering taking action to help mitigate climate change. I voted early and I voted yes on Initiative 732. If you live in Washington, I think you should as well. Wherever you live, vote for candidates who will take action on climate. I vote #ActOnClimate. I do it for salmon, bears, and people everywhere.

For more information on climate change science: You can read the climate change chapter I wrote for Katmai’s Interpretation Training Manual, available for free from Earth To Sky’s website. Also check out Skeptical Science, one of the best climate science website I’ve found.

9 thoughts on “On Election Day, Vote to #ActOnClimate”