Brown bears get fat, often really fat. They also lose a lot of weight and sometimes become really skinny. They are often fat and skinny in the same year. When you watch brown bears, either in person or via bearcam, you can sometimes make a fairly accurate determination of a bear’s body fat and relative health by looking at its shape.

Fatness can be used as an indicator of health in brown bears. Brown bears need to eat a year’s worth of food in six months or less to survive, and body fat is the key their survival. They can lose 30% or more of their body weight during hibernation and can continue to lose weight throughout the spring when few high calorie foods are available. In the Brooks River area, only after green plants begin to grow and salmon have arrived do most bears begin to regain lost weight and start to accumulate body fat.

While fat is important to bears, a thin bear isn’t necessarily an unhealthy bear. Young subadult bears and yearling cubs, for example, often appear thin in spring and early summer before many high calorie food sources are available. These bears usually regain lost body mass in summer and early fall.

Polar Bear International developed a handy scorecard to measure the relative fatness of polar bears. I’ve adapted it for brown bears. My brown bear fat index uses the same categories as the polar bear index, which ranges from skinny/emaciated to very fat/obese. I also included additional information for each category such as the age/sex class most likely to be in a category and the time of year bears are most likely to be in a category.

Please note, my brown bear index is subjective and based on my observations at Brooks River, Katmai National Park, Alaska. The polar bear fatness index is also subjective, but less so than mine because researchers who handle immobilized bears can palpate the animal to estimate its body fat content. (Katmai’s Changing Tides project also tracks body fat content in female brown bears, but uses bioelectric impedence analysis.)

16 Cinnamon shows an emaciated figure in July 2010. Notice his prominent hip bones and shoulder blades. If he had less fur, his ribs would also be noticeable.

In this photo, also from July 2010, Cinnamon’s vertebrae seem visible through his fur. Despite his lack of body fat in July, he survived winter and returned to Brooks in 2011. At the time, he was estimated to be at least in his late 20s, but could’ve been older.

234 Evander in July 2010 displays a thin body with noticeable hip bones. Evander was an older bear (probably older than 20 years) in 2010.

In this photo from early July 2016, 503 Cubadult appears thin with slightly visible hip bones. His narrow body shape is not uncommon for young subadult bears (he was 3.5 years old in July 2016), and does not necessarily indicate poor health. Rather it reflects the time of year and his low rank in the bear hierarchy.

Average: hip bones and ribs not visible; the bear’s body, neck, and head are evenly proportioned

This adult female, 505, is well proportioned and a good representative of average fatness for an early to mid summer bear. Photo taken on July 8, 2016.

Fat: fat over rump, stomach hangs low; bear’s neck is semi-fat but doesn’t distort the size of the head 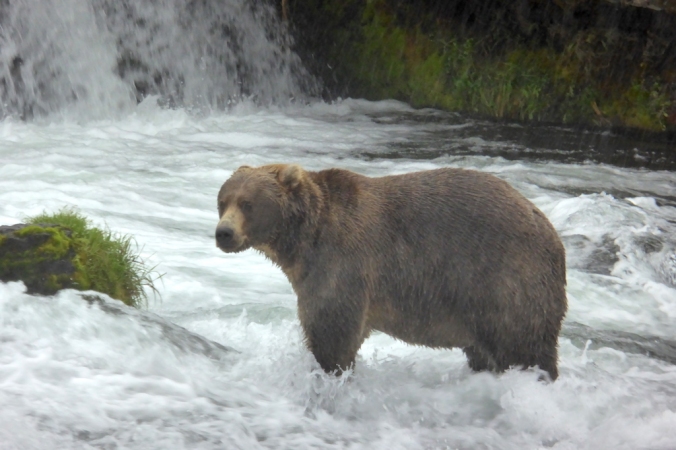 Katmai’s brown bears most often reach the fat class in late summer and fall when salmon are readily accessible and have been so for two months or more. In this photo from September 2015, 89 Backpack displays the typical body shape of a fat bear. Most bears attain this body shape before they hibernate.

Sometimes large adult males, like 747, can reach the fat category by the end of July. Some bears aren’t this fat when the go into the den, yet 747 reached this size months before hibernation. This photo was taken in late July 2015.

This NPS photo of 747 epitomizes an obese bear. (He should’ve won #FatBearWeek. Election was rigged!) Seriously, this is an extremely obese bear. I don’t think I’ve ever seen a bear this fat before. His belly hangs nearly to the ground (the water is not very deep where he stands in the photo). 747 is a very dominant adult male at Brooks Falls. As such, he has access to his choice of fishing spots. His well-endowed figure is proof of his dominance, health, and fishing skills.

409 Beadnose shows the ample proportions of an obese female in September 2015. Females with cubs do not usually attain this level of fatness because of the energetic costs associated with raising cubs. Beadnose did not have cubs in 2015.